We've been evaluating an active-passive master-master replication setup for our MySQL database, running on version 8.0. While diagnosing some general slowness issues, we were surprised to see very high disk IO ranging from 500MB/s - 1500MB/s on both servers.

I've found that stopping the slave on either server brings the disk IO back to expected levels, 15MB/s - 30 MB/s, and I'm concerned that we have a misconfiguration somewhere.

Here is what I've checked:

Here is the redacted configuration:

My problem sounds suspiciously similar to this person's dead thread from 2013 (Who were you, DenverCoder9? WHAT DID YOU SEE!?)

In an effort to zero in on the problem, we simplified the setup for testing. We used one master and one slave, both running 8.0.11, same configuration as above, and we saw the following write patterns according to iostat (master is blue, slave is red): 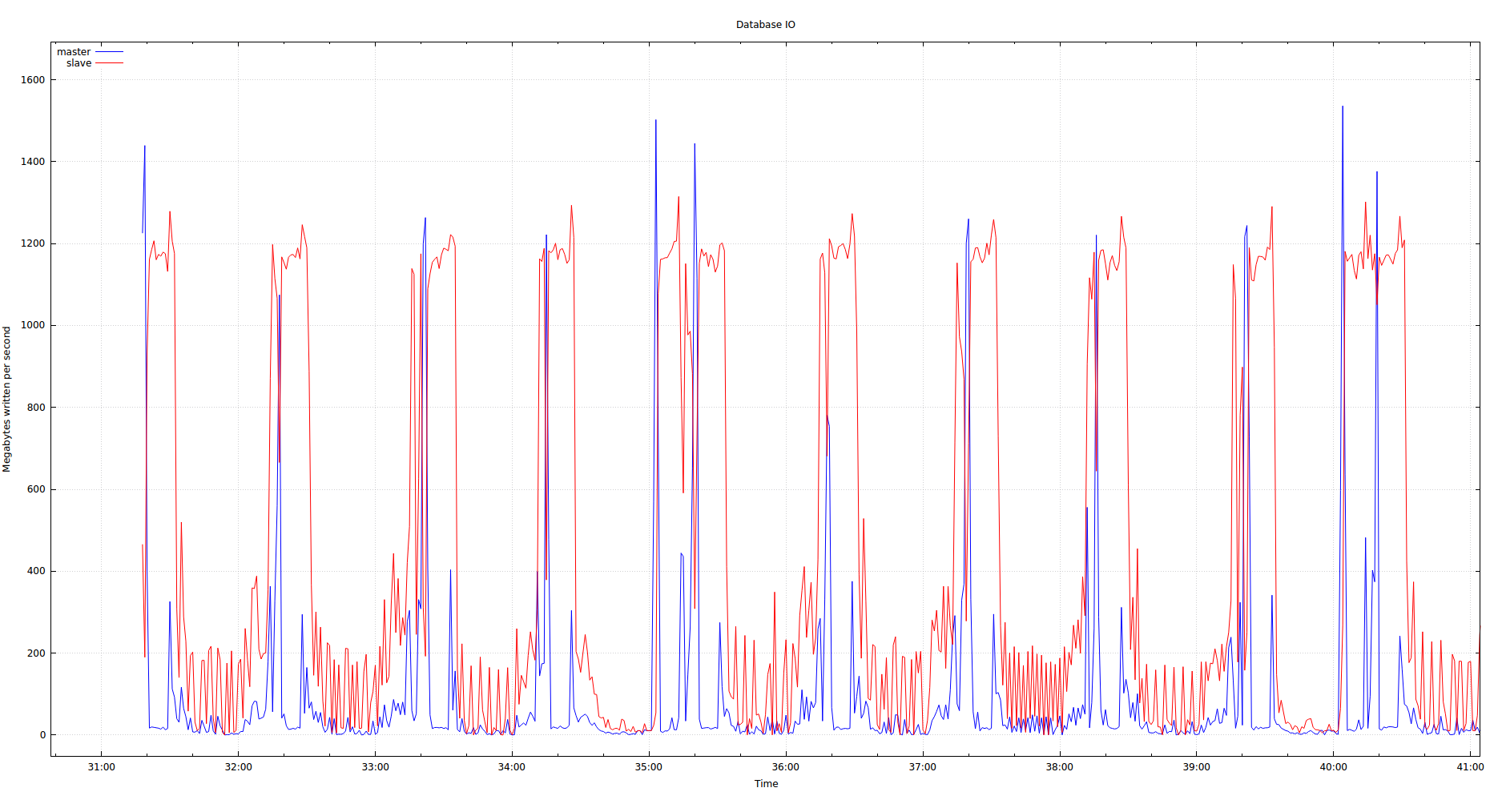 (The "Time" on the X-axis is the minutes and seconds of the current time.)

Those per-minute 1+ GB spikes on the master were tracked down to a script updating two small tables (1000-2000 rows each), around 10-15 MB in size on disk. These tables had keys, but the keys were not primary or unique. The script would DELETE all rows in the tables and then repopulate them by performing one INSERT statement per row, all within a transaction. Despite the glaring problems, I still don't understand how operations on tables this small can result in this much disk IO.

Without fixing the problems, we then returned to the master-master active-passive setup and saw the following (active master is blue, passive master is red): 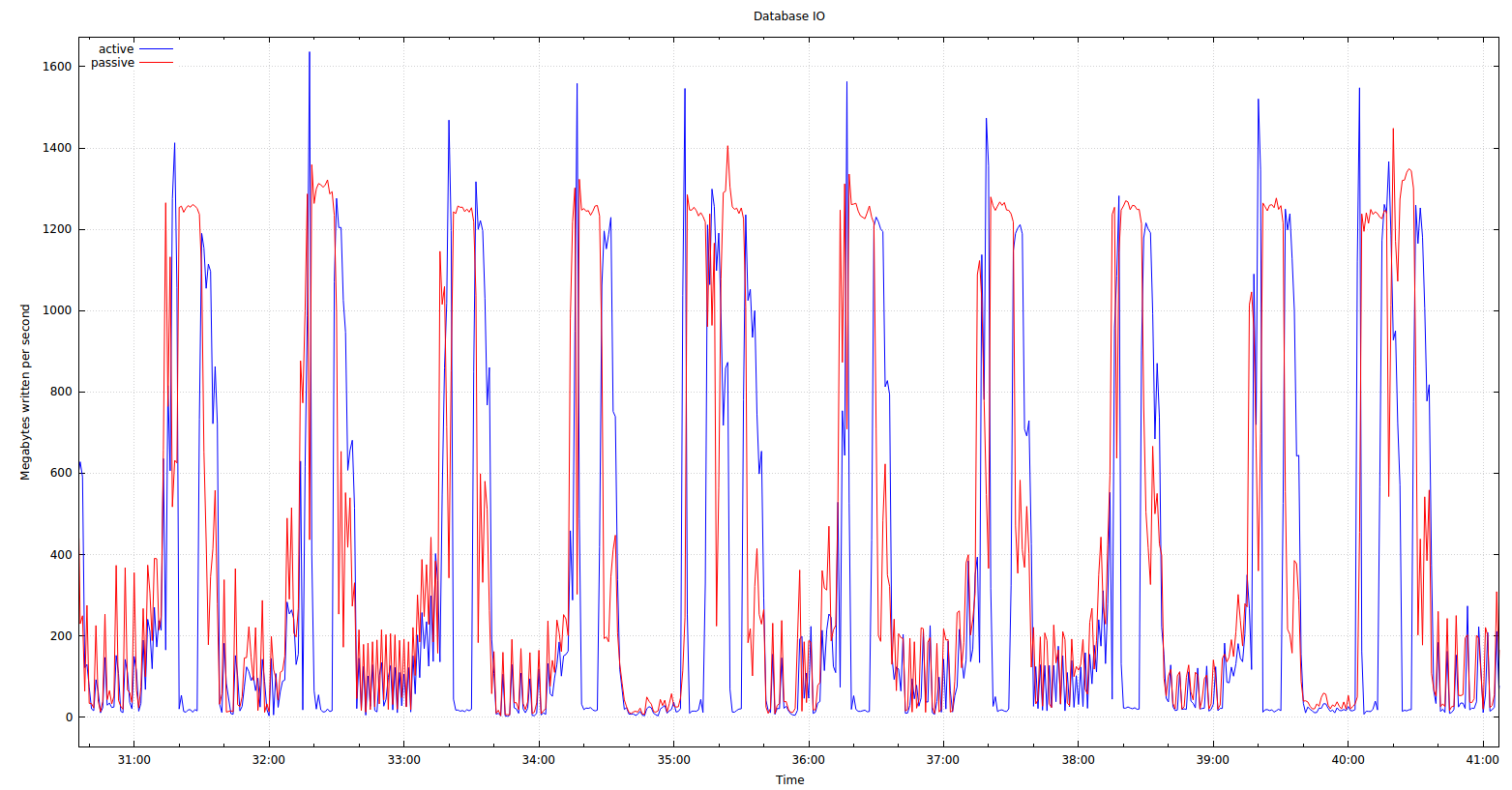 So some additional questions I have are this. Why is the slave consistently writing much more than the master in the first graph? Also, why in master-master replication is there the ping-pong effect seen above where writes to the master result in heavy IO on the slave, which results in heavy IO again on the master?

No, I don't see any configuration changes to make.

Well, I guess this still does not answer your question, but maybe it provides some more insight.

How to replace a table

This is a more efficient way to replace all of a table. It avoids the table ever being out of service:

The process of replication when using an active-passive master-master setup appeared to be as follows (based on examining binary and relay logs with mysqlbinlog):

Also, a major clue was at the bottom of the graphs: 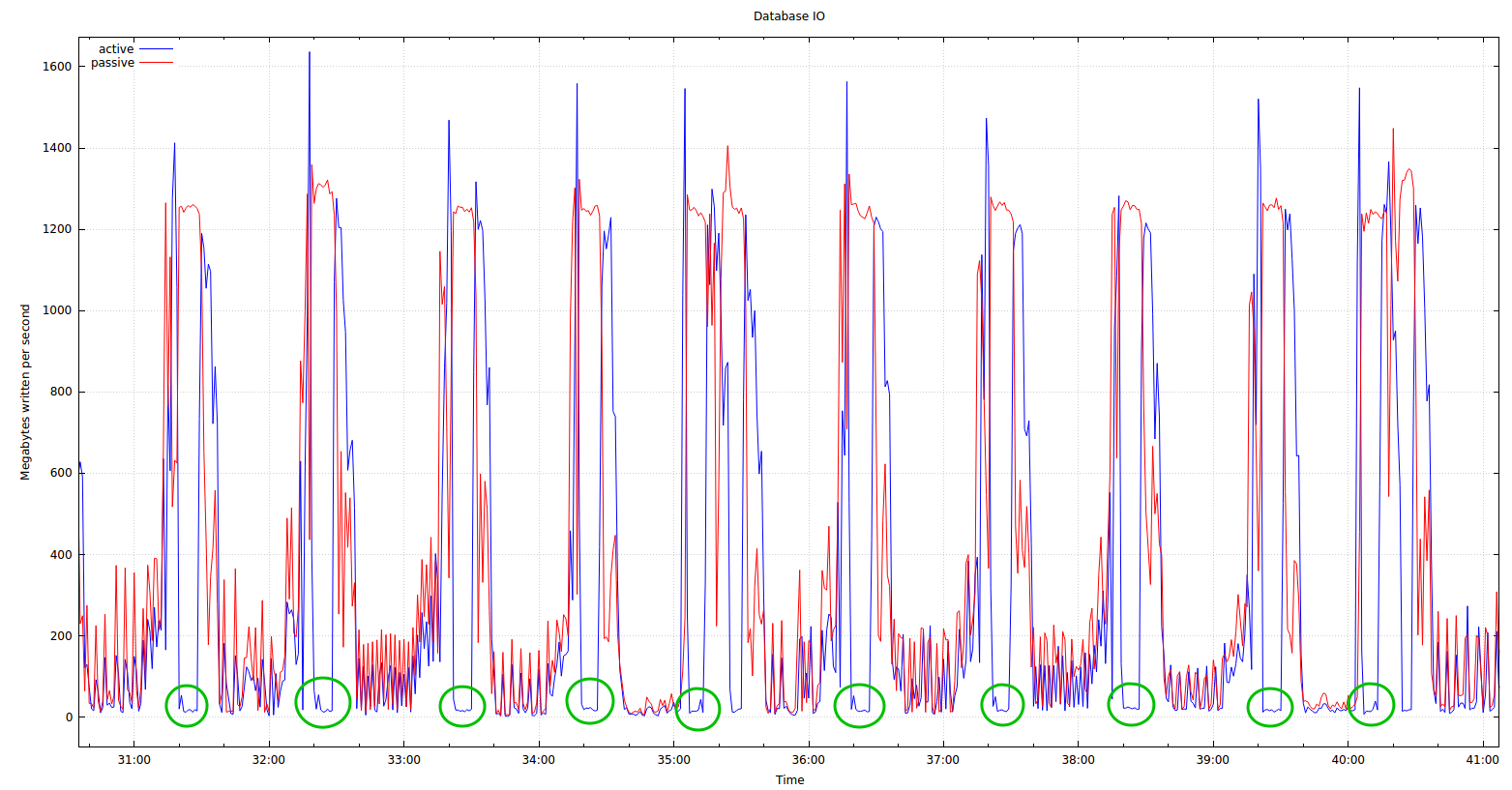 Whenever the passive master was pegged with disk IO, the active master had zero activity as if it was blocking (spoiler: it was).

So this was our conclusion:

We took two steps to resolve this problem.

First, we reduced rpl_semi_sync_master_timeout to 100 milliseconds. This minimized the time that the active master would block if its slave was behind. We did this to prevent database-dependent applications from hanging excessively should this scenario arise again. And we were willing to accept the additional risk of getting out of sync.

With these changes, the graph now looks like the following. Note that the disk IO delta between the active and passive databases is much smaller, and also that the spikes are much smaller: 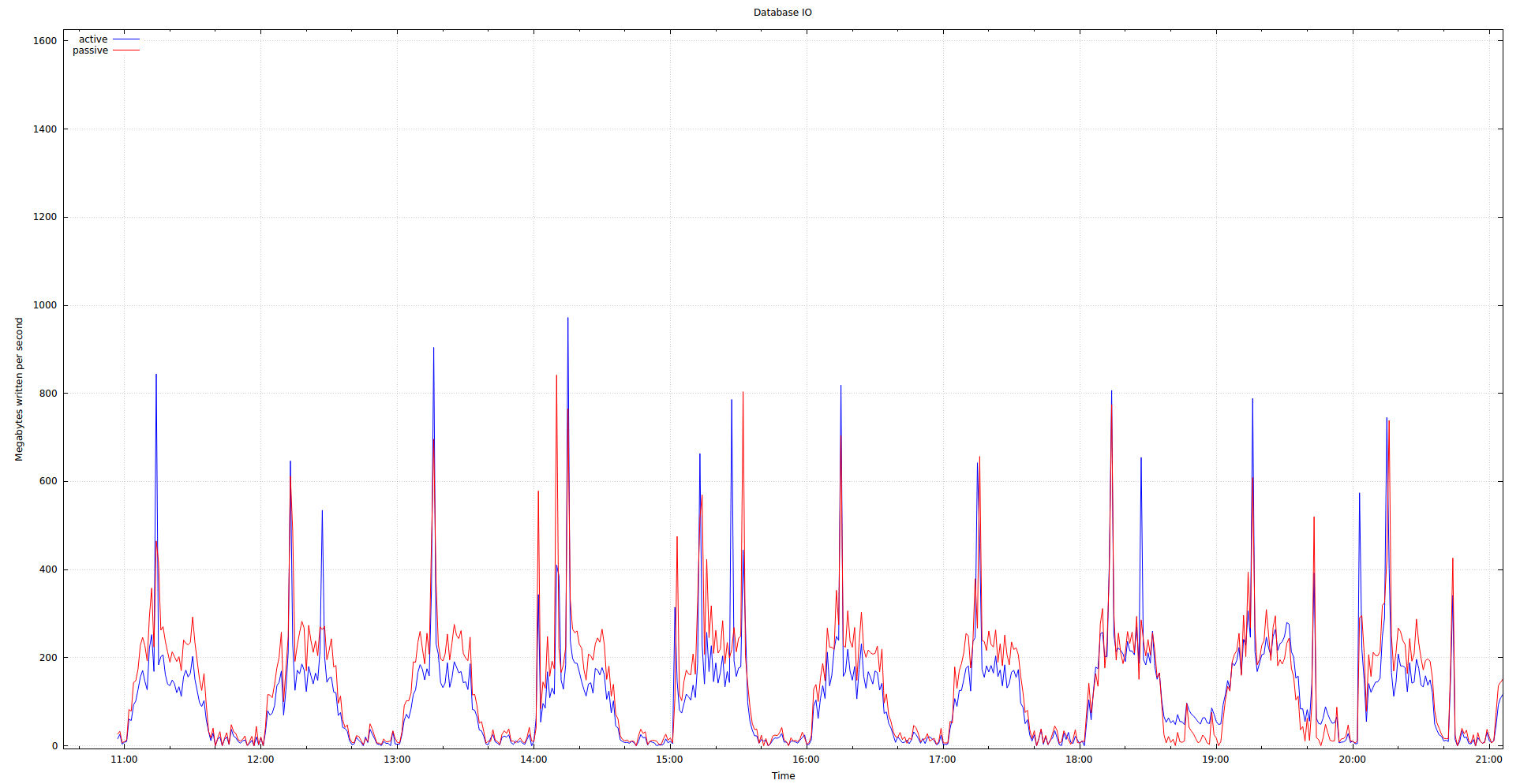 Suggestion to consider for your my.cnf-ini [mysqld] section