I need to design a data model for a typical RDBMS that will mimic the structure of your typical sports league. Architecturally my requirements are:

Attributes of the desired schema:

This would be simple enough to do and maintain referential integrity if the League structure was to be rigid. Here is what I was thinking, but I wondered if this would be a good design or if there is a better approach for this situation.

So basically I was thinking that Divisions and Conferences would be the same table with a self-referential foreign key looking upwards for its grouping parent. The advantage of this is that league grouping can actually go N deep.

Disadvantages are that this might not be very easy or useful to map in an ORM framework. Further the application developers might need to write a bit of logic to build this into tree like object structure that is useful for their purposes. Further still, without a trigger of some kind, I wouldn't know how to enforce that teams can't exist at both the Division and the Conference level at the same time from the Database level.

What are your thoughts on this approach, and do you see any viable alternatives to this?

The basic idea is to separate hierarchy of an organizational chart from actuals teams. 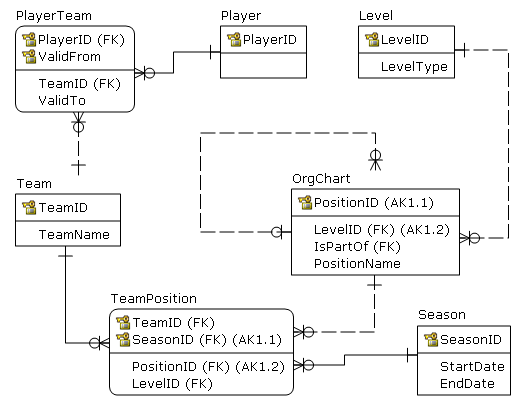 I imagine that most sports leagues don't change their hierarchy of conference, division, etc... very often so it's probably safe to have each level in its own table.

If your goal is a system that can handle different leagues that have different hierarchy depths, then the recursive table approach is probably better.

I don't know how easy it would be to do this with an ORM but I have a general mistrust of ORMs when it comes to anything other than simple CRUD operations... To prevent a team from existing at multiple tiers of the hierarchy, I'm not sure why your proposed Team.LeagueGroupId wouldn't work. You know what level the LeagueGroup referred to by LeagueGroupID is so you know that the team exists at the level of that LeagueGroup.

Not the answer you're looking for? Browse other questions tagged database-design referential-integrity or ask your own question.