Data inherently ordered as if it were a clustered index

I have the following table with 7.5 million records:

I notice that when there is a non-clustered index on the date field:

-and I run the following query:

-the data coming returned by the index access operation is sorted to match the key order of the PK/CX, reducing performance.

I was surprised to find that removing the index from the date field actually improves the performance of the query by about 30% because it no longer performs the sort:

My theory, and this may be obvious to the more experienced among you, is that it has figured out that the date column is implicitly ordered exactly the same as the primary key / clustered index.

So my question is: Is it possible to take advantage of this fact in order to improve the performance of my query?

I mocked up test data that mostly reproduces your issue:

Statistics for the query that uses the nonclustered index:

Statistics for the query that uses the clustered index:

Getting to your question:

Is it possible to take advantage of this fact in order to improve the performance of my query?

Yes. You can use the nonclustered index that you already have to efficiently find the maximum id value that needs to be updated. If you save that to a variable and filter against it you get a query plan for the update that does the clustered index scan (without the sort) that stops early and therefore does less IO. Here's one implementation:

Run stats for the new query:

As well as the query plan:

With all of that said, your desire to make the query faster suggests to me that you plan to run the query more than once. Right now your query has an open ended filter on the date column. Is it truly necessary to anonymize the rows more than once? Can you avoid updating or scanning rows that were already anonymized? It should certainly be faster to update a range of dates with dates on both sides of it. You could also add the Anonymised column to your index, but that index will needed to be updated during your UPDATE query. In summary, avoid processing the same data over and over if you can. 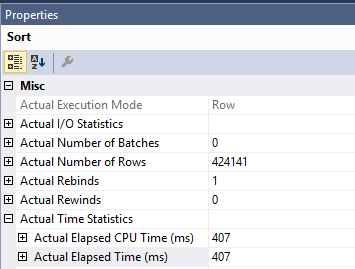 That leaves the sort operator with about 1600 ms of time. SQL Server needs to read pages from the clustered index in order to perform the update. You can see that the Clustered Index Update operator does 1205921 logical reads. You can read more about sorting optimizations for DML and optimized prefetch in this blog post by Paul White.

The other query plan that you have (without the sort) takes 683 ms for the clustered index scan and about 550 ms for the Clustered Index Update operator. The update operator does not do any IO for this query.

The simple answer as to why the plan with the sort is slower is that SQL Server does more logical reads on the clustered index for that plan compared to the clustered index scan plan. Even if all of the needed data is in memory there's still an overhead and cost to doing those logical reads. A better answer is much harder to get, in that as far as I know the plans won't give you any further details. It is possible to use PerfView or another tool based on ETW tracing to compare call stacks between the queries:

On the left is the query that does the clustered index scan and on the right is the query that does the sort. I marked call stacks in blue or red that only appear in one query. Not surprisingly, the different call stacks with a high numbered of sampled CPU cycles for the sort query appear to have to do with the logical reads required to perform the update on the clustered index. In addition, there are differences in number of sampled cycles between the queries for the same operation. For sample, the query with the sort spends 31 cycles acquiring latches whereas the query with the scan only spends 9 cycles acquiring latches.

Not the answer you're looking for? Browse other questions tagged sql-server sql-server-2017 or ask your own question.