I have created a very basic SQL table as following

I then performed a 3 Gig Bulk Insert

Then RAM usage for SQL server went Skyrocking, eating up ~30Go of RAM : 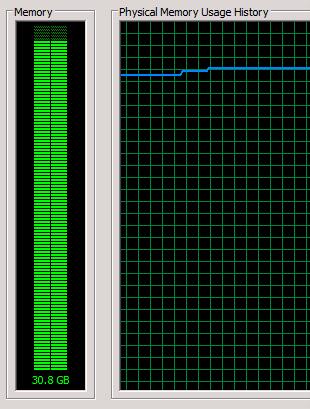 I prefer to think this is an abnormal behavior and that action can be taken to avoid this.

EDIT :
Ok, This seems to be the default behavior. Fair enough.
However, why isn't memory freed up long after the Bulk Insert is finished ?

A couple of extra-considerations :
As of the comments concerning SQL server freeing the memory when it is "told to" by the OS, my hands-on experience on a 24-Core 32 Gb Xeon Server proves this to be inexact : Once a Memory-Voracious BCP extract is over I have a pool of .Net Instances of my data processing application that need to process the extracted data, and they are left choking/fighting to share the remaining memory to try to perform their jobs, which take faaaaar longer that when SQL Server is turned off and memory is available for all applications to share. I have to stop the SQL Server Agent to make everything go smoothly and prevent Apps from crashing for Articiallt caused OutOfMemmroy Exception. As to artificial Brutal Memory Capping/Limitation, if Free Memory is available, why not use it ? Ideally it would rather be dinamically set to adapt to what is available rather than just being forcibly limited "randomly". But I guess this is by-design, so case closed on this last point.

It is normal behaviour for SQL Server to allocate as much memory as it can into it's buffer pool. Databases work best with lots of buffer. If you want to change the behaviour, you can set the 'max server memory' setting. Some good background reading on that is here.

If you really want the OS to take the memory back from SQL Server, take a big 20 GB file and copy it over the network. SQL Server will release the memory as the OS needs it. But I would watch a variety of performance counters while this is going on, and see how the performance of your BULK INSERT changes if you run it again either while the copy is going on or immediately after.

If you want to do this manually, then you should set a lower limit on SQL Server's max server memory setting, and restart the service. Now SQL Server won't use 28GB even if it needs it. But this seems to be artificially limiting SQL Server.

What you seem to expect is more flexible behavior, where you can have free memory part of the time. For what purpose? Is this like shrinking a database file to free up disk space that you can't use for other purposes because the database file is going to grow again?

It's funny, if you type a Google search for "why doesn't SQL Server" the most common auto-completion is "release memory."

This is unfortunately by design, please reference this post. However, in this post it does give you some instruction on how to control it.

9
How to free SQL Server memory?