SSMS crashes when attempting to create a database diagram

I'm currently using the latest version of SSMS (17.8.1) on windows 10 and everytime I try to create a database diagram it crashes without giving me any error message. I've already tried to re-install SSMS but the problem still occurs.

I've found that the database diagram tool seems to crash if you modify things outside of the diagram.

Diagrams appear to remain stable if:

Whichever method is used, this is a known issue.

To confirm, I have this issue while using SSMS 18.4 against a SQL 2016 Express instance.

I still have issues with the diagram tool. It is slightly more stable, though, if you modify anything outside of a current diagram, the editor complains about metadata and you lose your work. In fact, I found that I had to also close and reopen SSMS to ensure I could edit or create a diagrams. So, while SSMS remains a little more stable (that's debatable), whatever has been done is not a solution.

There also appears to be an issue with putting your PC to sleep, particularly if you're working over a VPN. I found that when you sleep your computer, then attempt to modify a diagram that was left open, the editor errors with various meta-data related faults (there has been more than one fault). The remedy to this was to reconnect the VPN, then refresh the database diagrams folder in SSMS... 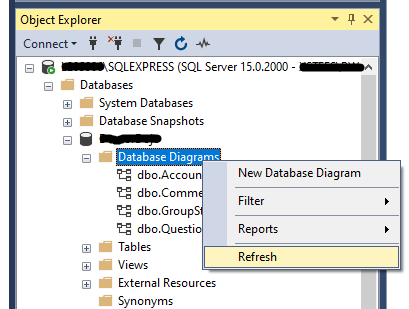 This should allow you to save the diagram.

Luckily, database diagrams won't be available in future versions of SSMS starting from 18.0, as it's a deprecated feature. Source

Not the answer you're looking for? Browse other questions tagged ssms crash windows-10 or ask your own question.