It's probably microseconds. I exported the target data to Excel and divided it by 1,000,000,000,000, which gives numbers that seem to be correct for microseconds, but I want confirmation before use such an xEvent query.

Extended Events are notorious for being poorly documented. Duration / units is especially so, see:

Despite the fact that "seconds" is in the event field name, you're correct that the value being reported is nowhere near seconds. You mentioned that you have to divide the number by a trillion (a 1 with 12 zeroes after it). Rather than microseconds, that actually means the number is in picoseconds. Which sounds...crazy. But I think it's right.

To confirm this, I ran SELECT * from dbo.Posts; on the StackOverflow2010 database while running three different trace tools simultaneously and compared the results. 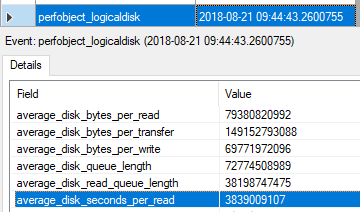 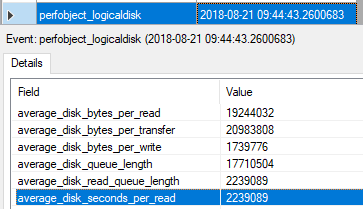 I think those two volumes are system reservations and restore partitions respectively. For reference, here's the output from DiskPart on my machine

This Windows performance counter object is documented as being reported in seconds. I only had it log the "C:" instance name. I see values around .002 seconds (2 milliseconds) on average during the period mentioned above. 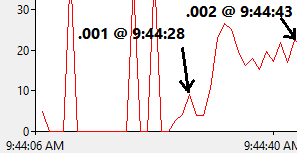 PerfView samples much more aggressively than the other methods here (see screenshot with a snippet of the details below). Dumping that output (which is filtered to only include I/O done by the SQL Server process) into Excel indicates that the average seconds per read was 2.7 milliseconds over the entire sample. 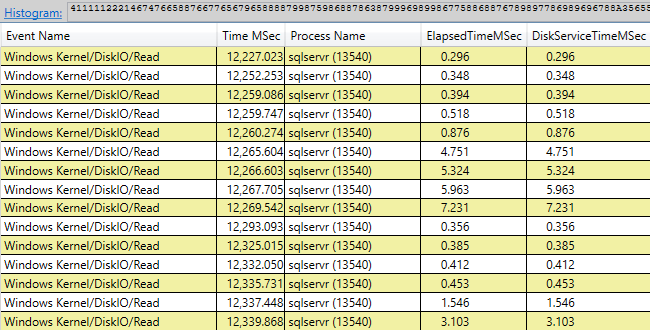 What does it all mean?

ETW Tracing and Performance Counters, which are well known Windows components for measuring various performance metrics, indicate that reads were taking on average somewhere between .002 and .003 seconds (2-3 milliseconds).

I might be bad at math, but it looks like the number reported by this EE field is in picoseconds. 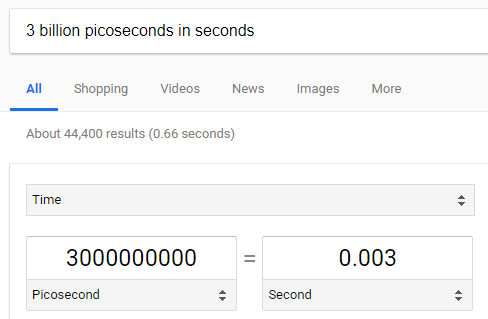 Not the answer you're looking for? Browse other questions tagged sql-server extended-events or ask your own question.

1
Importing from Excel
12
Find uncompressed size of all tables in a database
6
Why are virtual log files not always allocated in order?
3
XML/SQL Server 2008 Error: XQuery…Cannot implicitly atomize or apply 'fn:data()' to complex content elements
1
Datetime hourly precision
10
Incorrect process utilization from System health extended events?
12
Is this a symptom of an overloaded server?