UPDATE 2: I've actually ended up using this, and it's great after a couple tweaks. Here's my post on its actual design, and in action: http://tim.hithlonde.com/2013/lemon-schema-works/

I am building a web app, and I want it to support multiple languages. This structure has two components:

Here is my proposed table structure (note all the id's have relationships/indexes among them to make very efficient queries): 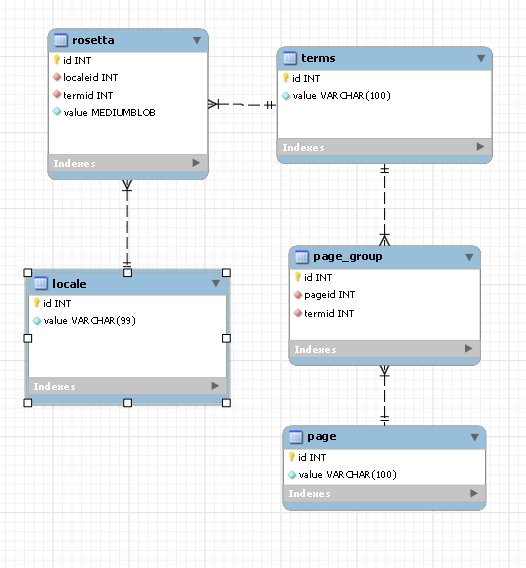 I only have to ask for two items; the language id that I need, and the page I need. It'll serve up all the terms, in the specified language, that are a part of the group of terms for that page.

I think this is a really good structure, but I would love some feedback.

UPDATE: To clarify, we are just talking about localization of the UI components. (labels, navigation, helpful text) All the info the user enters will be stored in unicode, not in this schema.

UPDATE 2: I've actually ended up using this, and it's great. Here's my post on it's actual design, and in action: http://tim.hithlonde.com/2013/lemon-schema-works/

We've done a lot of this, and (administrative) users were allowed to fix the translations live. (You still might want a caching layer, but I'm totally down with driving this with a real database and not resource files - it gives you a ton of power to query and find things which need to be translated, etc). I think your schema is probably fine, so I'll just pass on some stuff we learned in the hope that it's useful.

One thing you have left out is phrases with insertion points. In the example below, the order is reversed and the language is still English, but this could very easily be two different languages - pretend this is just two languages who normally put things in a different order.

In our pre-.NET, we had a routine which did the insertion so the phrases would look like this:

This would obviously simply be used in your code as <%= String.Format(phrase, username, points); %> or similar

Which helped the translator a bit. But .NET String.FOrmat doesn't support commenting within the format string, unfortunately.

As you say, you would not want to handle that in your php with locale awareness or meta phrases.

So what we had was a master phrase table:

and a localized table:

You've also assumed with INNER JOINS that the localized versions exist - we tended to leave them out until they were translated, so that query of yours would end up returning nothing at first (not even the default)

If a translation didn't exist, ours defaulted to English, then fellback to code-provided (in case the database didn't have the ID, and it was also clear from the code what phrase identifier "TXT_LNG_WRNNG_INV_LOW" was actually trying to get) - so the equivalent of this query is what we used:

Obviously, you might get all the things at one time using your page system.

We tended not to link things to the page because they were re-used a lot between pages (and not just in page-fragments or controls), but that's certainly fine.

In the case of our Windows-native apps, we used reflection and a mapping file from control to translation tag so that translation did not require re-compiles (in pre-.NET apps we had to tag the controls using the Tag or other special properties). This is probably a little more problematic in PHP or ASP.NET MVC, but possible in ASP.NET where there is a full-blown server-side page model.

For testing, you can obviously query to find missing translations very easily. To find places which need to be tagged, translate the entire phrase dictionary using pig-latin or Klingon or something like replace every non-space character with ? - the English should stand out and let you know that some naked plaintext has crept into your HTML.

Usually translations are done by external specialist companies. As such, it would be a hassle to manage the translated content inside a database. They are better off managing in "bundles" or properties files through some kind of language feature offered by your platform. To achieve that, in the database, you would simply place a mnemonic for the string. Then based on the desired language, you would lookup in the bundle. eg.

2
How to translate high level entity relationship into schema
3
Help with a multi-language medical database
0
Trouble in Multi-Language DB
5
Is there a well-known name for this “poor man's ref. integrity” schema design pattern?
2
How to re-design my database after an assumption about its structure has changed?
1
MySQL schema design - how to decide between an `enum` vs. a table join
0
Add newest values until current date with the year and month separated as 2 INT columns
2
Is using a JSON data type here appropriate?
0
Database choice for efficient read-heavy application and millions to billions of datapoints