Creating a Friendships database that includes a Block Friend option

My database teacher asked us to program a clone of Facebook using MySQL as the database management system, so I'm trying to represent a friends relationship in the corresponding database.

So far I have built the following tables by searching everywhere:

I pictured the Friends table as a self-relationship using UserID (declared as the Users table primary key).

Beyond some basic #1064 errors I'm working on: Is it possible to add a Block Friend option to this relationship? For example, if I don't want to talk with a person anymore, I just block them.

I would cover the “Block Friend” requirement introducing the concept of Friendship Status to the system—where “Blocked” is only one of the possible instances, since a Friendship may be also be, e.g., “Accepted” or “Declined”—, as I will detail as follows.

When modelling a relational database, I highly recommend (a) identifying and (b) formulating all the rules that apply in the business environment with respect to the informational characteristics of relevance, and do so before (c) creating tables and declaring constraints. In this way you can delineate the corresponding conceptual schema with the needed precision, and then the logical-level declarations are much more easy and natural.

So let us start with some basic expository rules of a Friendships system:

Then the Status aspect comes into play:

After having formulated all the business rules with accuracy, one can then draw an IDEF1Xa diagram like the one expounded in Figure 1 to supply a graphical communication device: 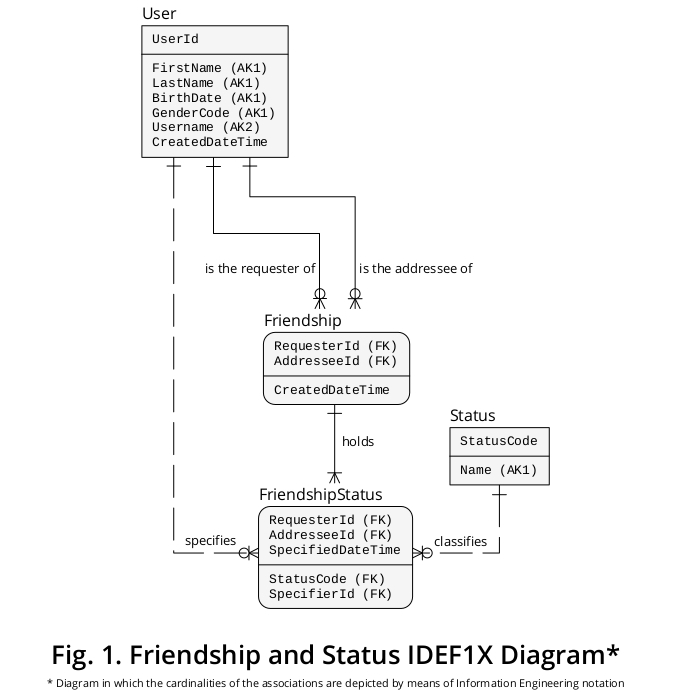 As shown, Requester and Addressee are labels that indicate the specific Role performed by each User taking part in a given Friendship.

The Friendship entity type depicts an association with a many-to-many (M:N) cardinality ratio that can involve distinct occurrences of the same entity type, i.e., User. This is an example of the classic conceptual construct known as “Bill of Materials” or “Parts Explosion”.

Status and Friendship are connected by way of the FriendshipStatus entity type, which portrays what may become a sequence of Status specifications for the involved Friendship instances.

a Integration Definition for Information Modeling (IDEF1X) is a highly recommendable modelling technique that was established as a standard in December 1993 by the U.S. National Institute of Standards and Technology (NIST). It is solidly based on (a) the early theoretical material authored by the sole originator of the relational model, i.e., Dr. E. F. Codd; on (b) the entity-relationship view, developed by Dr. P. P. Chen; and also on (c) the Logical Database Design Technique, created by Robert G. Brown.

Subsequently, I created the following logical-level arrangement in order to represent the conceptual aspects previously formulated (naturally, you will have to adapt it to your exact needs, as it may entail, e.g., several constraints not considered nor declared here and a different quantity of columns):

A Friendship row and its earliest FriendshipStatus related counterpart

With this arrangement, when a User requests a Friendship, the corresponding Friendship row has to be inserted along with the complementary FriendshipStatus counterpart, which in turn must contain a value of 'R' in StatusCode, denoting the fact that a User has simply requested the Friendship, and is waiting for the Addressee to accept it ('A'), decline it ('D'), or leave it as requested.

As usual, I would decidedly set up the multi-row operations that have to be executed as a single Unit of Work with the aid of ACID TRANSACTIONS. Needless to say, the assistance of the application program(s) component(s) accessing the database would as well be very helpful to facilitate the processing of the Friendships.

Subsequently, every time that the Status of a certain Friendship has to be put up-to-date, the Users would only have to INSERT a new FriendshipStatus row, containing:

To that extent, let us suppose that the MyStatus table, serving a “look-up” role, encloses the following data —with PK values that are (1) end user-, app programmer-, and DBA-friendly and (2) small and fast in terms of bytes at the physical implementation level—:

It can be said that the FriendshipStatus table serves the purpose of comprising a time series, which stands for the evolution of the Friendships of significance.

You can decidedly declare one or more views that comprise columns from several tables to facilitate, e.g., writing code for data retrieval.

As demonstrated in the sample data of the FriendshipStatus table, having a row that holds a value of 'B' in the StatusCode column would represent that some User decided to block one of his or her Friends.

And, yes, you can use your application program(s) component(s) to access the database and check the latest FriendshipStatus row (via MAX(SpecifiedDateTime)) for a given (RequesterId, AddresseId) combination of values to control the flow of the applicable processes of the system.

Other option: Retaining only the most recent Status

In case that, for whatever reason, you have to avoid retaining the FriendShipStatus history in the fashion previously described, you can discard the creation of a FriendshipStatus table and simply set up Friendship so that it includes a FOREIGN KEY constraint making a reference to Status.StatusCode directly:

In this manner, (i) the INSERT of a certain Friendship row goes with a value of 'R' in the StatusCode column, and each time that the Status of a Friendship is modified you just have to (ii) UPDATE the values in StatusCode, SpecifiedDateTime and CreatorId —which must enclose the identifier value of the latest User who specified the Status of the concerning Friendship—.

Various ideas presented in this post are based on this Q & A, where I propose a database design that meets the informational requirements of a similar business environment. I recommend reading those posts because, although the focus of that question is different from yours, that answer is more detailed and contains several points of relevance.

14
Designing a friendships database structure: Should I use a multivalued column?

4
What's wrong with this MySQL query?
3
Finding rows for a specified date range
1
Should I create a multi-column UNIQUE index?
3
Simple query is slow on 4M-rows table
4
Need help improving sql query performance
0
How to improve query count execution with mySql replicate?
0
one to many relationship DB structure
0
Performance impact of foreign key type in Mysql