"SELECT *" why is it an antipattern

On multiple questions here and on stack overflow i saw people saying in the comments and answers that select * from table is almost always an antipattern without any explaination why. Althrough I can sort of deduce why it is an antipattern. I may be looking over a detail that someone else with better understanding of the issue noticed.

So here is my question, why people say that select * is an antipattern.

When queries need to Sort, Hash, or go Parallel, they ask for memory for those operations. The size of the memory grant is based on the size of the data, both row and column wise.

String data especially has an impact on this, since the optimizer guesses half of the defined length as the 'fullness' of the column. So for a VARCHAR 100, it's 50 bytes * the number of rows.

Using Stack Overflow as an example, if I run these queries against the Users table:

Without an index on Reputation, SQL Server needs to sort the data on its own.

But the memory it nearly doubles. 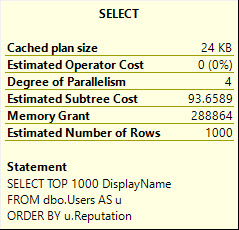 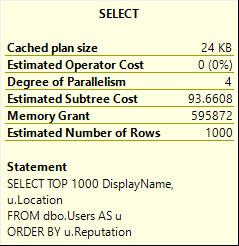 This gets much worse with SELECT *, asking for 8.2 GB of memory: 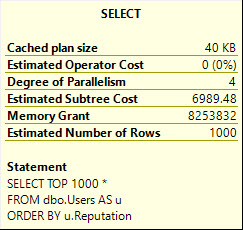 It does this to cope with the larger amount of data it needs to pass through the Sort operator, including the AboutMe column, which has a MAX length. 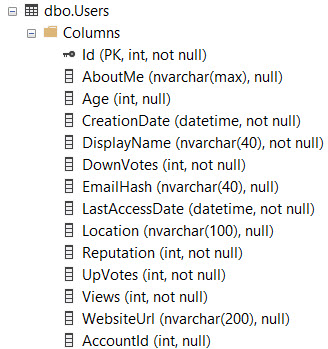 If I have this index on the Users table:

And I have this query, with a WHERE clause that matches the index, but doesn't cover/include all the columns the query is selecting...

The optimizer may choose not to use the narrow index with a key lookup, in favor of just scanning the clustered index.

It is a question of control.

Many programmatic interfaces to the database depend on the number and order of returned values.

Firstly, your database has to go and work out which columns are available on the table[s] that you're querying. That's an additional overhead and, in [older versions of] older DBMSs, that could be a [very] significant performance bottleneck if there was lots of contention around the System Catalog tables holding this information.

Secondly, it assumes that you know everything about these tables and that you always will. Database are inherently shared resources and will, over time, have many people working on them, changing the data structures to keep up with changing requirements. Today, you could create a table with two columns (say, "username" and "password_hash") and use that as the core of your Application's login screen. Everything works well for ages ... until someone [else] comes along and shoehorns into your tidy, little table a couple of dozen extra, "blob" fields, containing gigantic data or photos or whatever. Suddenly, your login screen slows to a crawl because the query is pulling back all ("*") those extra, gigantic, network traffic-bloating fields in which it has no interest at all!

Also, you can write code that depends on the order in which fields are returned (you shouldn't, but you can). This is most common in reporting circles, particularly if data is "handed off" to a User's spreadsheet program of choice. When the table structure changes, fields can "move around" and your (their?) data "suddenly" starts arriving in the "wrong" order.

Always ask for the columns that you need, in the order in which you need them.

And, just for completeness, remember the "order by " clause - rows in [Relational] tables have no intrinsic order.

1
Does the number of columns been selected affect query speed?
5
Select * Order by vs Select column Order by performance
1
Bad practice to return more columns than required
0
Is it possible to select all columns but one column using SQL syntax?
0
Use One Table or Many One-To-One Tables
0
How to split a large table in SQL Server

9
Why does the fill factor in SQL Server default to 0 (100%)?
3
Why set up static data in views vs. using tables in mysql?
1
Oracle - WHY do an ORDER BY for INSERTs AS SELECT?
0
Select max(pk) instead of sequence.nextval
1
Chance of duplicate on single select max into statement
37
Setting BUFFERCOUNT, BLOCKSIZE, and MAXTRANSFERSIZE for BACKUP command
11
Why is mixing column collations in a single database considered bad?
42
What's a good use case for SELECT * in production code?