The issue is I'm trying to migrate the SSRS Reports to the Power BI Report Server instance on a third server that I plan to unify both report databases. 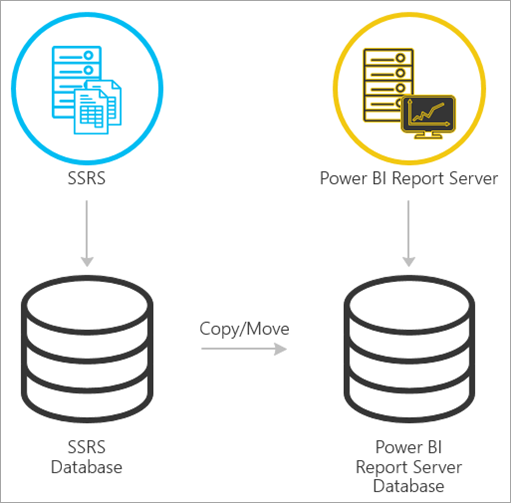 I've created the backup of the SSRS databases (and encryption key) and restored on the PBI server, but it's not working. If I restore only the PBI database (and its encryption key) it works fine on the destination server. On the Report Server Configuration Manager I can only set the ReportServerPBI (that I restored from the server that already runs the PBI) to have it working. If I set the ReportServer database that I've had made the backup it doesn't work.

Am I mistaken or is there any way that I can put these services in the same server/database and running under the Power BI Report Server?

Will I have to keep separate instances to have both dashboard types running?

...is there any way that I can put these services in the same server/database and running under the Power BI Report Server?

You can have SSRS and PBIRS on the same Server, but they will require their own ReportServer databases in order to run them both.

If you want to migrate your SSRS reports into PBIRS, then you need to follow the steps in the MS article. 1. Restore a copy of the SSRS database to a new server, and then 2. install PBI RS. PBI RS will update the database and retain the reports within it.

I think the article gets a little confusing as most people reading it will be migrating from SSRS to PBIRS on a different SQL Server. There isn't a lot of info about running both side by side. But it can be done.

Not the answer you're looking for? Browse other questions tagged ssrs ssrs-2016 powerbi-report-server or ask your own question.