In a web application using SQL Server 2008 R2 as the backend, I have several fields, that if present, add WHERE clauses to the query.

If I was to have all queries generated as like clauses, such as:

If Uri contains no % , is the optimizer smart enough to treat that as WHERE Uri = @Uri or do I have to handle that application side?

I realize that the optimizer could change out from under me someday and this is a bit sloppy, but I am still curious.

I have done a one off test that seems to suggest that this is maybe the case with the >= ... <= conditions: 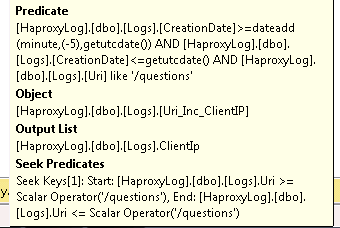 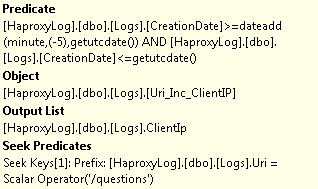 So they both trigger index Seeks on that contrived Index. Is >= ... <= the same as = in this case, and will this always happen?

Most likely yes, if there are proper indexes in place and statistics are up to date, then the query optimizer should be able to use the existing indexes and best operation when possible (seek).

You will have detailed information in these 2 articles: Index usage by %Like% operator – Query Tuning on MSDN and SQL Performance - Indexes and the LIKE clause on myitforum.com.

Somewhere in that time (not sure if it was pre-R2 or not), we started receiving complaints about a long-standing, never-updated search script. This script does exactly what you are talking about, where occassionally there will be WHERE clauses that contain wildcardless LIKE calls, such as:

Queries that would normally take under a second were taking closer to 5-10 seconds in this new environment.

I did some optimization on our end. In this case it was a perl script, and without wanting to touch the business logic too much, I was able to adjust the querystring to return LIKE comparisons to equality (=) comparisons:

That regex replaces LIKE clauses where the string being compared doesn't contain a % wildcard marker, with an = equality clause. (I've not tested it exhaustively yet, but seems to work and make sense.)

Not the answer you're looking for? Browse other questions tagged sql-server sql-server-2008 optimization or ask your own question.

4
SQL Server Optimization/Configuration for Inflexible Application
4
SQL Server Row Count sp_spaceused rows discrepancy
1
Bandwidth usage in Sql Server
7
Query optimizer recommends adding index instead of using existing index
14
SQL Server recreating plans each day
6
Will the Query Optimizer Ignore A Fragmented Index?
2
How to force a merge join without a hint
5
Query shows sort cost,even when required index is available
2
Can I edit the batches received by SQL Server on the fly?
15
When can SARGable predicates be pushed into a CTE or derived table?