As I'm working on an educational website, I'm facing a problem with my database design scheme - I can't find the correct design that eliminates duplication in the tables I'm creating.

What I'm trying to design is [n] tables that will store subject_names, subject_id, grade_name grade_number and ofcource grade_id. But since the same subject could be taught for different grades; there will be duplication.

For example, Math will be taught for every grade which means there will (10+) columns with subject_name set to Math, but each one will have different grade_id.

So, what's the correct way of creating such a database design?

EDIT:
Sorry for confusion, I'm referring to grade as a year of education.

My recommendation would be to have the subject table with just subject_name and subject_id, have the grades table with just the grade_name and grade_id. Then create a third table called subject_grades that has the columns subject_id and grade_id, on this table create foreign keys to the subject.subject_id column and the grades.grades_id column. I'd highly recommend putting a primary key over both of the columns in this table or at least a unique key.

I hope this helps you.

Mr.Brownstone's answer sounds fine, but be aware that for small amounts of data, having a perfectly "normalized" schema may be counterproductive. Let me explain a little.

You'll have three tables, and no data will necessarily be duplicated. The additional table is usually referred to as a "pivot" table, and it might not have any 'real' data in it. Instead, it has metadata. It lists all the ways in which Grade and Subjects are related.

The primary key Mr. Brownstone mentioned, composed of two columns on a pivot table, is called a "composite natural key". You can find lots of web articles saying it is evil. It's not necessarily evil, but it can be a hassle if you aren't careful. If you build a big programming structure on top of it, that abstracts you from the keys, so you can easily change the keys without changing the code much, you'll be fine. But it doesn't sound like you will be doing that. So instead, you'll end up with specialized code that handles multi-part keys. Yuck. When your web app wants to refer to a final grade for a student, it doesn't send/receive (e.g. via URLs) a single integer that represents it, instead it sends pairs of keys that represent Subject/Grade combinations.

And you can extend that thought, because you could have Subject/Grade/Semester/Year composite keys to refer to every class ever taught. Or maybe there are multiple locations or teachers for a class in a year.

So, an alternative to a "composite natural key" is a "surrogate key". Now, your Subject/Grade pairing has a representation of a single number. So you have a table with nothing but three key columns in it. You can see how that might not make your life simpler when you are developing this application. Pivot tables are generally a pain to develop for by-hand.

But, on the other hand, maybe it isn't really "Math" that you are teaching in the 7th and 8th grade. Maybe it's Geometry and Calculus. It is quite acceptable to "denormalize" your data intentionally. Many very popular open-source applications do this, and it makes them MORE powerful, not less. So now, we are back to the starting point, where you might be better off having a table that says:

The fairly classical way of modelling this situation is as follows: 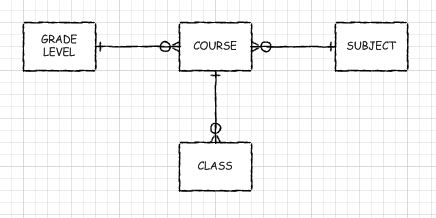 Grade level represents the year/form/grade at which the subject is being presented. The material actually being taught is the subject. When certain material is taught to students at a given grade level, that is a course. When a particular instructor teaches a course to a given group of students in a certain place at a designated time (or set of times) that is a class.

Whether you choose to use natural or surrogate keys is a separate discussion. The fundamental structure of your data model will probably end up looking like this ERD.

Not the answer you're looking for? Browse other questions tagged mysql database-design schema best-practices or ask your own question.

4
How can I integrate a new system to a design scheme I previously created?