Why are some views listed as Materialized in MySQL explain statements if Materialized views don't exist in MySQL?

Hopefully the question is self explanatory. I've read that Materialized views do not exist in MySQL, yet sometimes I see something like this in EXPLAIN 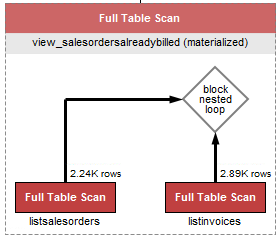 Can somebody clear this up for me? What's the "(materialized)" mean if materialized views aren't a thing in MySQL? Using MySQL Server 5.6, Workbench 6.3.

To the outside world (if I am not mistaken), a "materialized view" is a permanent table that is automatically inserted/updated in based on data flowing into some other table.

In MySQL, it has a rather limited meaning. It refers to certain "derived" tables (eg, FROM ( SELECT ... )). The Optimizer has multiple ways to deal with such constructs.

There is essentially nothing that you, the programmer, can do to control this version of "materialized view". (Well, rewrite to avoid the need.)

5.7 and 8.0 have even more performance improvements. But still no "materialized view" as the outside world knows.

Not the answer you're looking for? Browse other questions tagged mysql mysql-5.6 materialized-view or ask your own question.

19
Best way to create a materialized view in MySQL

6
Grant table privileges to a user connecting from any host
3
Complex MySQL Query returning almost all the correct rows
1
Select row from one query where opposites are not present in second query
0
ORDER BY optimization
0
status table join slows down query by 10 seconds
0
Why is my SQL statement sometimes slow and sometimes fast?
0
Create a materialized view on commit with PIVOT function
2
Trouble Figuring out why My Query is so slow
1
MySQL Workbench, Windows Server 2019, MySQL not showing Performance, Information of MySQL Schemas!