LocalDB has the same programmability features as SQL Server Express.

SQL Server Express LocalDB, a lightweight version of Express that has all of its programmability features, yet runs in user mode and has a fast, zero-configuration installation and a short list of prerequisites.

And then, building on the previous point, for the SQL Server express 2012 T-SQL Syntax

Express supports the same T-SQL language elements you find in any edition of SQL Server. Not only can you issue data manipulation language queries against the database, but you can also run data definition language statements to create such objects as views, triggers, cursors and stored procedures 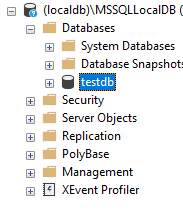 The temporary table also works when changing the db's compatibility mode to 100 (2008).

Also, SQL Server would likely not even start up if these were not available as they are used in system stored procedures, features found in msdb, etc.

LocalDB installation copies a minimal set of files necessary to start the SQL Server Database Engine. Once LocalDB is installed, you can initiate a connection using a special connection string. When connecting, the necessary SQL Server infrastructure is automatically created and started, enabling the application to use the database without complex configuration tasks. Developer Tools can provide developers with a SQL Server Database Engine that lets them write and test Transact-SQL code without having to manage a full server instance of SQL Server.

Note it has restrictions:

2) LocalDB does not support FILESTREAM.

4) An instance of LocalDB owned by the built-in accounts such as NT AUTHORITY\SYSTEM can have manageability issues due to windows file system redirection; Instead use a normal windows account as the owner.

I hope this helps!

Not the answer you're looking for? Browse other questions tagged sql-server t-sql tempdb temporary-tables sql-server-localdb or ask your own question.