Execution Plan is different when Constant Variable is Null

I am working on a scenario in which I am providing a variable a value. When I pass Null value, the Query Engine didn't scan the Join tables. As per Logical Query Processing, first FROM Clause Executes, then ON and JOIN executes. But in this Case the Query Engine direct go to Where Clause. Could anyone please explain the Behavior Query Engine when there is a NULL value of a Variable. I am using SQL Server 2016. 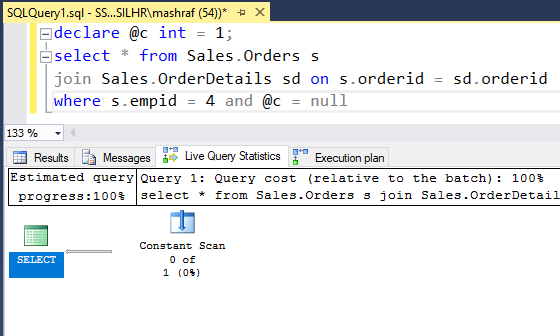 When the Value is changed then 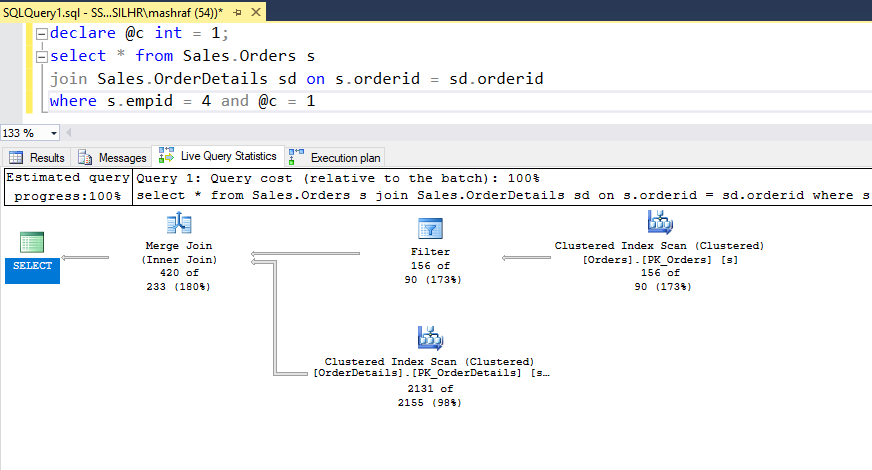 You're seeing an example of contradiction detection. SQL Server's query optimizer is smart enough to perform a few quick checks at the outset of query processing to determine if it can take any shortcuts to return results without doing much (any?!) work. One such short circuit is to check if the where clause contains an "impossible" limit, such as:

SQL Server sees you are comparing something to NULL, which always returns false, and simply returns an empty resultset. If the items in your WHERE clause were separated with OR instead of AND, then further checks would be performed and you might not see the constant-scan plan.

Comparing any value to NULL using = always returns false. You may want to use WHERE @c IS NULL instead. If you rewrite your query using that syntax, you'll see SQL Server does in fact "run" the query. Consider this:

The query plan for this query:

Versus the query plan for this query:

The problems around comparing NULL values applies to JOIN conditions as well. Consider this:

I'll insert a row into each table with the value of i set to NULL:

Now, if we try to JOIN the two tables in a "simple" query, we get no results returned, since NULL cannot be compared to anything, not even another NULL value!

Both tables are scanned by the query processor, as shown in the query plan:

In other words, be careful using NULL values.

In future, please don't post pictures of code, instead create a minimal, complete, and verifiable example that others can use in their answer.

Not the answer you're looking for? Browse other questions tagged sql-server performance sql-server-2016 optimization execution-plan query-performance or ask your own question.

2
Is it correct, order of where clause doesn't matter when it is used with join?
35
How (and why) does TOP impact an execution plan?
5
Clustered Index Scan when using greater than in WHERE clause
3
Modification_Counter influence the Cardinality Estimator?
1
how to get a better execution plan for empty sets?
8
100% CPU with bad execution plan
0
Subquery Applying Incorrect Predicate?
4
Behaviour of performance counter “Checkpoint Pages/sec” under load
10
Strange query plan when using OR in JOIN clause - Constant scan for every row in table