I have a tricky bit of SQL that's giving me a bit of trouble. I'd like to introduce several new columns to a key table whose components may or may not be used based on user configuration (Dimension's 1-10). For architectural reasons these are stored as "UNIQUEIDENTIFIER"s.

However upon the introduction of these new dimension columns in my DB, I'm now facing performance problems in several other stored procs that manipulate data in this key table, one of which I will include below. It appears as though the method that I have implemented to support these new columns is inefficient and I'm not exactly sure why that is the case and the best way to remedy it.

With 50,000 records in Table1 the performance of this query is quite poor, several minutes at least. Remove the "@DimensionXEnabled = 0 OR" condition though and the query will run in several seconds.

I feel I have several options to optimize this, I could do one of the following:

I feel that the SQL optimizer is making bad decisions with this query, if I write the query without the OR condition it run's quickly, even though the results are exactly the same. The query plans look almost identical other than that in the long running join, most of the processing time is used in the LEFT OUTER JOIN statements merge: 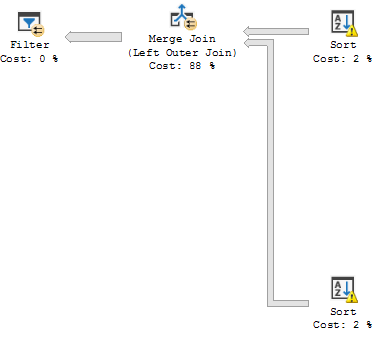 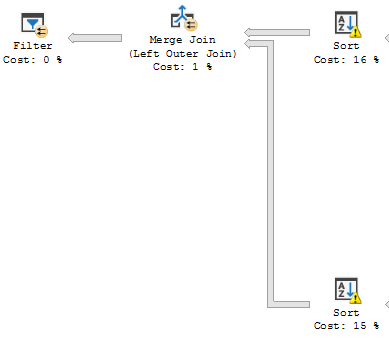 I'm unsure how to proceed, my question is, is there a better option?

I've been doing more research into this, attempting various ways to get around the poor performance, so far I haven't found any good solutions just more information:

Sounds like a kitchen sink query. You can make this work well for most cases with dynamic SQL, since you can generate a different execution plan for each combination of parameters.

IMO,Biggest mistake is the place where you are using CROSS JOIN.

First self join [dbo].[Table1] and filter the resultset then with this resultset use CROSS JOIN.It will give tremendous boost .

Hope my point is clear,it is untested.

Not the answer you're looking for? Browse other questions tagged sql-server database-design performance optimization query-performance or ask your own question.