SSMS - How to do case-insensitive searches in Object Explorer

Preface: I am not referring to queries.

There are numerous places in SSMS that allow for filtering, such as the Object Explorer and Profiler, but these all treat filters as case-sensitive with no visible option otherwise, so if you search for contains 'ASDF' then values like "ASDF_MyEntity" are included but "asdf_MyEntity" are omitted. 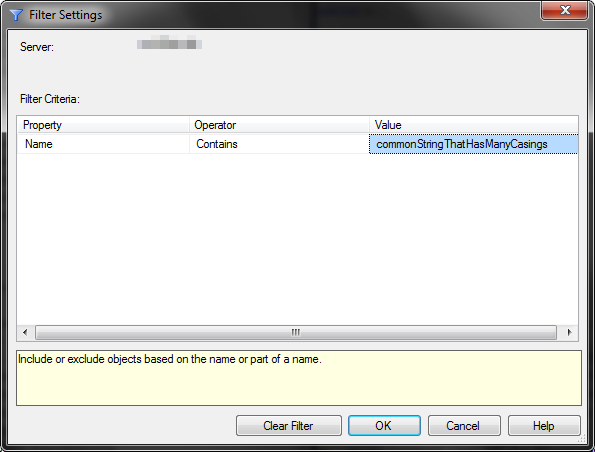 For example, we have a lot of SQL Agent jobs on a large server, and I'm trying to use the Object Explorer to filter them by project name, which we always prefix the job names with. However, these appear as both uppercase and lowercase variants.

Another use case is searching for related stored procedure to a module among thousands of entries. If one is named inconsistently (e.g. PascalCase versus camelCase), the filtered search will omit it. This seems like quite an unnecessary hazard of phantoms for debugging.

Furthermore, the sorting in the Object Explorer places uppercase variants before lowercase (so uppercase Z comes before lowercase a) for every type of entity (e.g. table names, stored procedures, job names, etc.), so I either have to scroll around a lot, or check two different filters (or more if it's not all uppercase or all lowercase letters — 2len(name) times to be precise).

I realize I can just query jobs, tables, and other entities manually, but doing this is nonsensical given that SSMS exists, as its name is "SQL Server Management Studio."

Is there something I can do to make SSMS (and SQL Server Profiler) ignore case like every other Windows application? Perhaps I can change a collation setting locally?

Also, why was this decision made by Microsoft when implementing SSMS? I have found it to be only detrimental.

It is technically possible to do this case-insensitive filtering, though only due to a bug in SSMS. I don't have SSMS 2014 (version 12.x), but I did get it working in SSMS 17.9.1 and 18.0 Preview 6, connected to an instance with a default collation of Hebrew_100_BIN2.

Seeing that the query uses LIKE, I figured I would try using single-character range wildcards (i.e. [ and ]). Passing in a pattern of [Tt][Ee][Ss][Tt] did not work, however, due to certain characters getting escaped. It seems that [, %, and _ all get wrapped in [ and ] to turn them into literals (i.e. no longer having special meaning).

Seeing that the value used with the LIKE operator (i.e. the value entered into the UI) was concatenated into the query instead of passed in as a variable (i.e. tbl.name like N''%Test%'' instead of tbl.name like N''%'' + @_msparam_XX + N''%''), I started thinking, "Isn't there a reason why it's dangerous to do this with user input? Hmm, I wonder ..." And so I passed in a ' and it was escaped into ''. Normally this is exactly what should happen with a single-quote. However, this is being used in Dynamic SQL, so it's nested one-level deeper than where '' is properly escaped. A string within a string needs a single-quote to be escaped as '''', or double-escaped, because '' merely ends the string within a string.

For example, when filtering on "Tables", the generated code (the one line that matters) is:

If I had passed in "Te'st", the generated code would have been:

and yes, it does get an "unclosed quotation mark" error.

We can't pass in either [ or % without those being wrapped in [ and ], BUT, we can concatenate stuff onto the N'% string, such as the output of a function. And, we can bypass the escaping of the [ and % characters by passing them in as hex / VARBINARY values, and then CONVERT them back into NVARCHAR once inside.

So, when filtering on Stored Procedures, we are starting with normally generated code of:

In order to make this work, we need to pass in a string having the following structure (in place of "Test"):

We could use -- at the end instead of AND 'x' <> ', but the AND construct ensures that if there is additional parts of the query that following this part, and are on the same line, that it continues to function as expected.

To generate our "escaped" filter, we can use the following:

Pasting that hex value into our SQL Injection work-around, we get:

If we set our filter to the value directly above, the generated code will be:

And the generated code is passed into sp_executesql. The statement that is executed shows up in Profiler as:

This technique works because 0xYYYY.... is not something that the parser is looking for. It's only looking for the literal values of [, _, and %, and we aren't passing those in. We are just passing in something that will be translated into those once the Dynamic SQL is executed.

But it doesn't need to be a VARBINARY string that is passed in. Any function that passes back a string will work. You just need to concatenate the ending of N'% with something, followed by what comes just before %'), hence: ' + {something_ending_with_%'} AND 'x' <> '. I could have used + NCHAR(91) + N'Tt' + NCHAR(93) + to represent [Tt], but that seemed a lot bulkier than a continuous VARBINARY literal. However, if you just want a %, then doing + NCHAR(37) + N' would be just fine. Remember to use NCHAR() and prefix literals with N since this is all NVARCHAR data.

So, you don't want to have to create the [Tt][Ee][Ss][Tt] string each time, and convert it to VARBINARY. I get that. Oh, and you have no access to add / change objects in SQL Server. Ok. But you do have access to tempdb, right? If you can create a function in tempdb, then this can be even easier. Just execute the following:

Then set your filter to:

Generated code will be:

You will have to adjust the column alias since tables uses tbl.name instead of sp.name. But now you can pass in any string and it will compare using a case-insensitive collation!!

And, this function will stick around until the instance is restarted. So you will only need to execute the above T-SQL every once in a while.

I have submitted the following feedback items to Microsoft:

Using the profiler to capture the queries that runs when applying the Contains filter, I found the query:

Which contains the part:

And gives me the result:

As @BobKlimes noted, which means it is not possible on CS Servers.

It also appears to not be possible on CS DB's on CI Servers:

As a result, we have the same issue as you noted in the added link.

Unless you find where the query is stored and change it, I don't think there is a way around it.

The following query does give me what I want,as I added the COLLATE hint, so i tried creating a plan guide on the original query, with the collated query's query plan XML.

Query that gives me the needed filtering

While I can create the plan guide, does not seem to stick to the original query.

My guess is that it is short for:

NO_PLAN: query processor could not produce query plan because forced plan could not be verified to be legal for query

I am probably doing something not possible with plan guides.

Not the answer you're looking for? Browse other questions tagged sql-server ssms collation case-sensitive or ask your own question.