I have a table that can be created and populated with the following code:

For all rows that have a finite collaboration distance based on RecordKey with another row, I would like to assign a unique value—I don't care how or what data type the unique value is.

A correct result set that meets what I'm asking for can be generated with the following query:

To better aid what I'm asking, I'll explain why GroupKeys 1–3 have the same SupergroupKey:

I should add that the solution needs to be generic. The above table and result set was merely an example.

I removed the requirement for the solution to be non-iterative. While I would prefer such a solution, I believe it's an unreasonable constraint. Unfortunately, I am unable to use any CLR-based solution; but if you want to include such a solution, feel free to. I will likely not accept it as an answer though.

The number of rows in my real table is as large as 5 million, but there are days when the number of rows will "only" be around ten thousand. On average there are 8 RecordKeys per GroupKey and 4 GroupKeys per RecordKey. I imagine that a solution will have exponential time complexity, but I am interested in a solution nonetheless.

This is an iterative T-SQL solution for performance comparison.

It assumes that an extra column can be added to the table to store the super group key, and the indexing can be changed:

If you are able to reverse the key order of the present primary key, the extra unique index will not be required.

This solution's approach is:

For the key update:

The final state of the table is:

Using the expanded test data set provided in Michael Green's answer, timings on my laptop* are:

This problem is about following links between items. This puts it in the realm of graphs and graph processing. Specifically, the whole dataset forms a graph and we are looking for components of that graph. This can be illustrated by a plot of the sample data from the question. 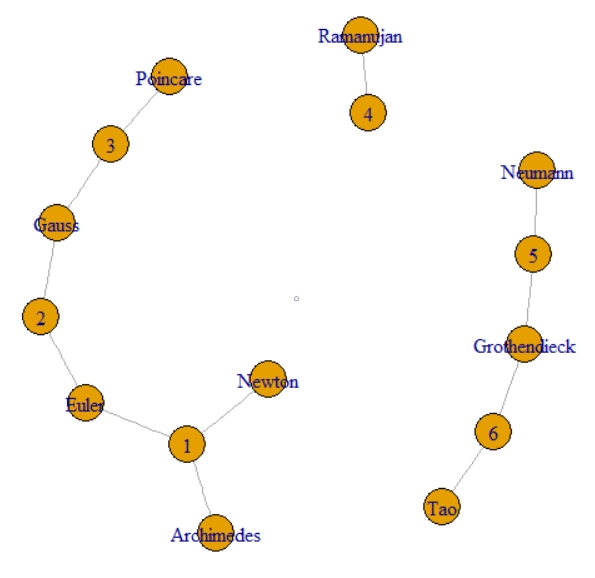 The question says we can follow GroupKey or RecordKey to find other rows that share that value. So we can treat both as vertexes in a graph. The question goes on to explain how GroupKeys 1–3 have the same SupergroupKey. This can be seen as the cluster on the left joined by thin lines. The picture also shows the two other components (SupergroupKey) formed by the original data.

SQL Server has some graph processing ability built into T-SQL. At this time it is quite meagre, however, and not helpful with this problem. SQL Server also has the ability to call out to R and Python, and the rich & robust suite of packages available to them. One such is igraph. It is written for "fast handling of large graphs, with millions of vertices and edges(link)."

Using R and igraph I was able to process one million rows in 2 minutes 22 seconds in local testing1. This is how it compares against the current best solution:

When processing 1M rows, 1m40s were used to load & process the graph, and to update the table. 42s were required to populate an SSMS result table with the output.

Observation of Task Manager while 1M rows were processed suggest about 3GB of working memory were required. This was available on this system without paging.

I can confirm Ypercube's assessment of the recursive CTE approach. With a few hundred record keys it consumed 100% of CPU and all available RAM. Eventually tempdb grew to over 80GB and the SPID crashed.

I used Paul's table with the SupergroupKey column so there's a fair comparison between the solutions.

For some reason R objected to the accent on Poincaré. Changing it to a plain "e" allowed it to run. I didn't investigate since it's not germane to the problem at hand. I'm sure there's a solution.

Here is the code

This is what the R code does

I'm not an R expert. Likely this could be optimised.

The OP's data was used for validation. For scale tests I used the following script.

I've just now realised I've gotten the ratios the wrong way around from the OP's definition. I don't believe this will affect the timings. Records & Groups are symmetrical to this process. To the algorithm they're all just nodes in a graph.

In testing the data invariably formed a single component. I believe this is due to the uniform distribution of the data. If instead of the static 1:8 ratio hard-coded into the generation routine I had allowed the ratio to vary there would more likely have been further components.

A recursive CTE method - that is likely to be horribly inefficient in big tables:

Not the answer you're looking for? Browse other questions tagged sql-server sql-server-2016 or ask your own question.

0
Move/Copy unique rows from TableA to TableB, if they are not in TableB
2
updating the entire column with datetime values based on other values in the row
9
SQL Server - Export large table without primary key
1
Constraint on existing table - unique combination of values only when another column is null
7
How to setup solution for multi-dimensional distance search with SQL Server spatial data types
0
Select distinct values in column with condition
0
matching names and assigning unique identifier - master client index