Why Do My Nonclustered Indexes Use More Space When I Delete Rows?

I have a large table with 7.5 billion rows and 5 indexes. When I delete roughly 10 million rows, I notice that the nonclustered indexes seem to increase the number of pages they're stored on.

I wrote a query against dm_db_partition_stats to report the difference (after - before) in pages:

Index 1 is the clustered index, Index 2 is the primary key. The others are nonclustered and non-unique.

Why are the pages increasing on those non-clustered indexes?
I expected the numbers to at worst stay the same.
I do see performance counters report an increase in page-splits during the delete.

When deleting, does the ghost record have to move to another page? Does this have to do with "uniqueifiers"?

We are in the middle of rolling out RCSI, but right now, RCSI is off.

It is a primary node in an availability group. I know that snapshot is used somehow on secondaries. I'd be surprised if that was relevant. I plan to dig into this (looking dbcc page output) to learn more. Here's hoping someone has seen something similar.

One possible scenario that very much amuses me:

To demonstrate the growth, I took the Stack Overflow database export (which doesn't have RCSI enabled) and created a bunch of indexes on the Posts table. I checked index sizes with sp_BlitzIndex @Mode = 2 (copy/pasted into a spreadsheet, and cleaned up a little to maximize info density):

I then deleted about half of the rows:

Amusingly, while the deletes were happening, the data file was growing to accommodate the timestamps, too! The SSMS Disk Usage Report shows the growth events - here's just the top to illustrate: 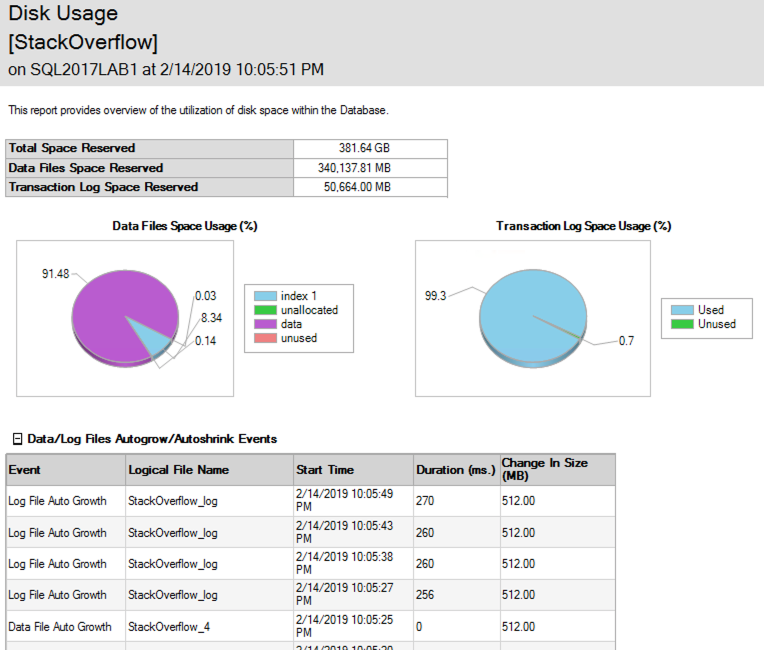 (Gotta love a demo where deletes make the database grow.) While the delete was running, I ran sp_BlitzIndex again. Note that the clustered index has less rows, but its size has already grown by about 1.5GB. The nonclustered indexes on AcceptedAnswerId have grown dramatically - they're indexes on a small value that's mostly null, so their index sizes have nearly doubled!

I don't have to wait for the deletion to finish to prove that out, so I'll stop the demo there. Point being: when you do big deletions on a table that was implemented before RCSI, SI, or AGs were enabled, the indexes (including the clustered) can actually grow to accommodate the addition of the version store timestamp.

Not the answer you're looking for? Browse other questions tagged sql-server sql-server-2014 nonclustered-index or ask your own question.