Why would writing the CTE to an actual table provide a performance improvement?

Today, I got burned with a query that is about 1000x faster if the CTE is written to a real table.

The query itself is in the link, but I suspect it isn't important. To simplify, I needed a list of all the claims in an insurance policy where one claim met a certain condition (cat = 1).

which was super duper slow. If I rewrite it to look like this:

it's way, way faster. This is odd to me.

Question Why would writing the CTE to an actual table provide a performance improvement?

Even though they are estimated plans and not the actual ones, the difference to me looks like it is coming from joining the tables: RATING_CONTRIB_LOSS, RATING_CONTRIB_USR, cmbgrp, rating_revision_set, and the Rating table from the ratings CTE.

Joining these tables spawn huge table spools (lazy spool), that could be even bigger on the actual plan.

For every row in the top part of the nested loops operator, the bottom result set is scanned resulting in

These table spools are not present in either of the two plans in the temp table queries.

What I am getting at is that the query part that inserts into the table is alike to the corresponding query part of the CTE. There are some differences but I think that the major cause of the slowdown is because of the table spools.

An example of a difference is that the full table scan on RATING_CONTRIB_LOSS in the CTE plan is changed to a scan with a residual predicate in the temp table plan.

And you could argue that the second part of the query that uses the temp table might access the RATING_CONTRIB_LOSS table again. And I would have to agree because it will be doing an expensive key lookup. 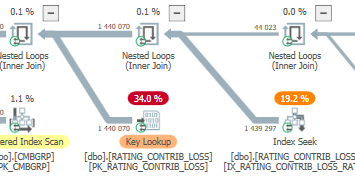 However, the second table spool in the CTE plan is also based on a nested loops join with theRATING_CONTRIB_LOSS table, which is not present in the temp table plan, and that is a big plus.

I do believe that the difference in execution time comes from the query using the temp table's result in such a way that costly operators are not used. More specifically the Table spools. I would need the actual plan to be 100% sure.

As a sidenote, rewriting CTE's into temp tables or just splitting up queries in general can in many cases give better execution times.

I would also use actual #temp tables to store your intermediary results in.

184
What's the difference between a CTE and a Temp Table?
11
What Rules Determine When SQL Server Use a CTE as an "Optimization Fence"?