This isn't a duplicate; my scenario is different from others I've found:

To my knowledge, I'm not using IPV6 in any way, shape or form. I certainly haven't configured it.

The service will start when I make any of these configurations:

If I do either of these, the service fails to start:

This has got me pulling my hair out.

Because netstat doesn't indicate that anything is listening on port 1433, that leaves the possibility that a client is already using port 1433 when SQL tries to start. From the SQL Server Premier Field Engineer blog post about "TCP Port is already In Use":

The second situation involves a client running on the server using the same dynamic port as SQL Server. Every TCP session requires two endpoints – a client endpoint and a server endpoint. Each endpoint is an IP Address/Port combination - also known as a TCP socket. Normally, the client socket code will ask the OS to provide a port from a range of dynamic ports. The server socket is the IP/TCP port of the service the client is connecting to (SQL Server for example).

The default dynamic port range might include port 1433. You can check it with netsh int ipv4 show dynamicportrange tcp.

...if you happen to have a client (think Windows OS system services) that starts BEFORE SQL Server does, it could use TCP/1433 for its client socket. ... So, how do you fix and prevent a situation like this? There's another feature within the OS that allows you to tell the OS the TCP ports in the Dynamic Port Range that should be EXCLUDED. All that is needed is to run the following with an Administrative Command Prompt:

After that setting is made, the OS will not give any clients that port. Services can listen on it still, but you prevent clients from getting it when asking the OS for a dynamic port.

The original poster indicated that even though the logged error mentioned IPv6, his problem turned out to be with IPv4. But if it had been an IPv6 port conflict, the same process can be followed for IPv6.

It might be over a year, but I do hope this will help others as well.

I could not confirm this, but it looks like the same SQL server instance like to assign the same port value to all the ports.

You'll need to open SQL Server Configuration Manager (If in case you cannot find it, https://blog.sqlauthority.com/2019/03/01/sql-server-sql-server-configuration-manager-missing-from-start-menu/) 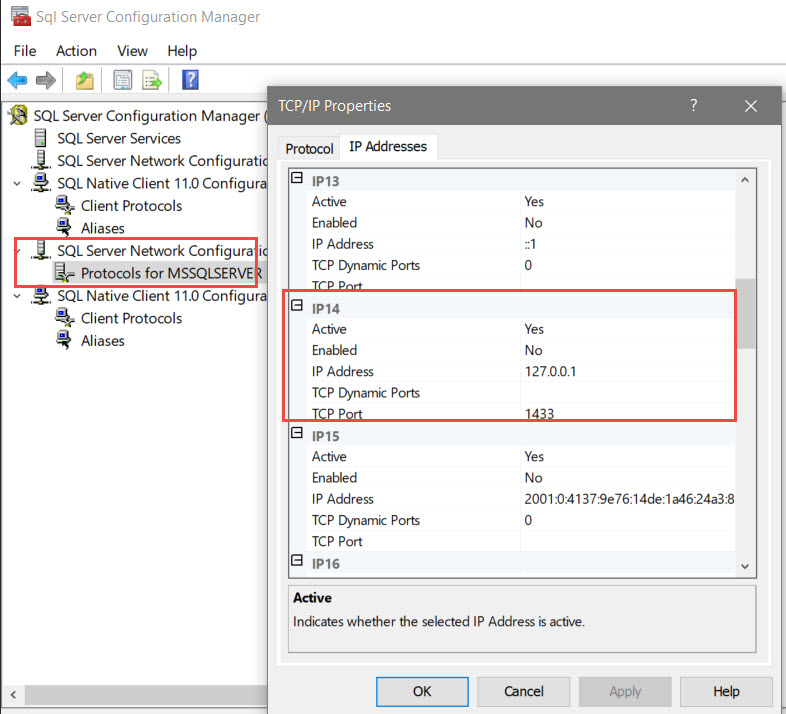 Only assign one IP to use port 1433 and configure others for dynamic value, by setting TCP Dynamic Ports to 0 and blank off the TCP Port value. I chose 127.0.0.1 (loopback IP @ local) to bind with. Restart your SQL Server service.

Not the answer you're looking for? Browse other questions tagged sql-server tcpip or ask your own question.

1
Cannot telnet SQL Server port 1433
11
SQL Server is started but didn't listen on any port
2
MSSQLSERVER service does *not* start, port 1433 in use
2
Open port 1433 to use SSMS securely
1
Accept remote TCP/IP request from aLL IPs in SQL server
2
How can I connect to SQL Server from All IPs?
1
When to use a TCP dynamic port and when TCP Port?
9
Configure SQL Server Analysis Services (SSAS) to run on same IP as SQL Server instance
4
SQL Server Multi-Instance IP Configuration - Service Doesn't Start