Mapping a 1:1:N ternary relationship to a relational schema

I have a question about mapping (conceptual) n-ary relationships to (logical) relations.

Assume we have three strong entity types: Member, Equipment, and Time Slot, and a relationship named Reserves between them.

The attributes do not matter (just assume we have an Id key attribute), but the cardinality ratios are as follows: 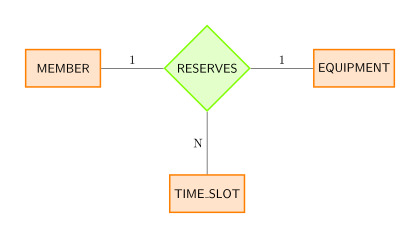 And there is no total participation constraint.

In look across notation (I believe): 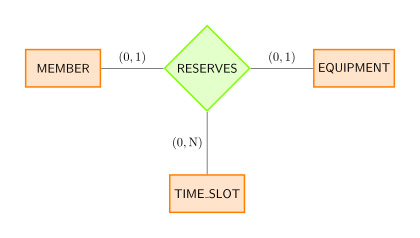 I'm trying to map this relationship to a relation in a relational design. We would have:

Where the three attributes are foreign keys to, respectively, the relations that correspond to MEMBER, EQUIPMENT and TIME_SLOT.

But what should be the primary key?

Applying this recipe blindly make that only TIME_SLOT.Id is the Primary Key, which does not make sense at all (two different equipments can be reserved at the same time!).

Having the three attributes being the primary key does not reflect the fact that one equipment cannot be reserved multiple times at the same time slot.

A candidate key of a relation is a set of attributes such that every tuple (record) of the relation must have values differing from those of all the other tuples.

A primary key can be either chosen among the different candidate keys of a relation, or can be a surrogate key, that is an artificial identifier invented to uniquely distinguish all the records of the relation.

Surely, a primary key should not be a strict superkey, that is a key from which we can remove one or more attributes so that the remaining attributes still uniquely identify all the tuples of the relation.

So the the primary key in your case could be: a) the couple (EQUIPMENT_ID, TIME_SLOT_ID); b) the couple (MEMBER_ID, TIME_SLOT_ID); c) a surrogate key like RESERVES_ID. If there are no particular reason to introduce another attribute as surrogate key, you can use any of the two couples of attributes as primary key, and declare the other pair as unique.

If your question really is: in case of a generic ternary relationship, with the cardinality as in the example, represented as a relation with three foreign keys, which are the candidate keys of such relation?

From this, we can easily derive that the relation has only two candidate keys, AC and BC. So, in terms of a relational database system, you can choose any one of them as primary key, and declare the unique constaint for the other.

If you are trying to implement this with just constraints & indexes then to me it sounds like you are going to need multiple constraints over the same items of data to enforce this behaviour. I'll explain below:

You can meet the requirements of this rule by placing the primary key across all 3 fields. This will enforce that the combination of all 3 fields may only occur once.

You will need a unique constraint over TIME_SLOT.id and EQUIPMENT.id in order to achieve this. This will enforce that the equipment can only be booked once per time slot.

A member can reserve only one equipment by time slot (the 1 on the right).

You will need a unique constraint over TIME_SLOT.id and MEMBER.id in order to achieve this. This will ensure that a member cannot book the same time slot more than once.

This will then give you a table like this:

I've never done a course on relational theory, so excuse me if the below seems naive but your relationship is not really 1:1:N. As all entities can occur multiple times and only the combination of the relations produce the constraint.

So assuming the order of MEMBER, EQUIPMENT, TIME_SLOT:

2
Relationships between subtypes of an entity
2
Ternary Relationship in an ERD: What would the cardinalities look like in this situation?
2
How can I enforce a one-to-zero-or-one relationship with multiple types?
0
Foreign Key as Primary Key when "converting" conceptual entity-relationship elements to logical relations
2
Troubles with an attribute that depends on the value of another attribute
1
ER-Model to relational mapping