Why does a simple loop result in ASYNC_NETWORK_IO waits?

The following T-SQL takes about 25 seconds on my machine with SSMS v17.9:

It accumulates 532 ms of ASYNC_NETWORK_IO waits according to both sys.dm_exec_session_wait_stats and sys.dm_os_wait_stats. The total wait time increases as the number of loop iterations increases. Using the wait_completed extended event I can see that the wait happens roughly every 43 ms with a few exceptions: 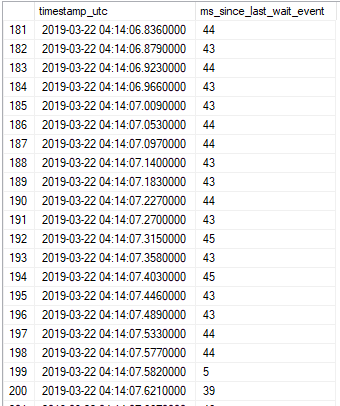 In addition, I can get the call stacks that occur right before the ASYNC_NETWORK_IO wait:

Finally, I noticed that SSMS uses a surprising amount of CPU during the loop (about half a core on average). I'm unable to figure out what SSMS is doing during that time.

Why does a simple loop cause ASYNC_NETWORK_IOwaits when executed through SSMS? The only output that I appear to get from the client from this query execution is the "Commands completed successfully." message.

The documentation for SET NOCOUNT says:

You are not running the statements in a stored procedure, so SQL Server sends DONE tokens (code 0xFD) to indicate the completion status of each SQL statement. These messages are deferred, and sent asynchronously when the network packet is full. When the client does not consume network packets quickly enough, eventually the buffers fill up, and the operation becomes blocking for SQL Server, generating the ASYNC_NETWORK_IO waits.

Note the DONE tokens are different from DONEINPROC (code 0xFF) as the documentation notes:

You will see a dramatic reduction in ASYNC_NETWORK_IO waits using:

You could also use sys.sp_executesql to achieve the same result.

An example TDS packet as seen in the inline function sqllang!srv_completioncode_ex<1> had the following 13 bytes:

Ultimately, the number of ASYNC_NETWORK_IO waits depends on the client and driver, and what it does, if anything, with all the DONE messages. Testing with a loop 1/10th of the size given in the question (5,000,000 loop iterations) I found SSMS ran for about 4 seconds with 200-300 ms of waits. sqlcmd ran for 2-3 seconds with single digit ms waits; osql around the same run time with around 10 ms of waits.

The worst client by far for this test was Azure Data Studio. It ran for almost 6 hours: 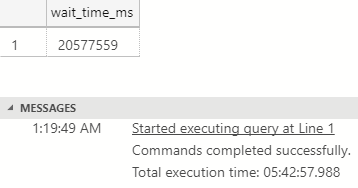 0
Is it possible to disable DoneInProc tokens in MSSQL Server
37
Why is using a table variable more than twice as fast as a #temp table in this specific case?
31
Why is the speed of executing statements dependent on the network connection?

1
sys.dm_exec_requests does not show short lived requests?
4
Why is there ASYNC_NETWORK_IO wait type on Shared Memory connections?
5
Get specific result without using loop
13
Why do async_network_io wait types occur?
0
Does dm_exec_procedure_stats.total_worker_time include signal waits?
10
Why does a plan with FULL optimization show simple parameterization?
2
Simple recursive CTE stuck in infinite loop
2
How to dig deeper into ASYNC_NETWORK_IO waits
3
Why does upsert result in a deadlock?