Creating and querying a database to set hierarchical associations between Groups, Users, Items and Points

I am working with three entity types, Group, User and Item. A Group consists of Users, and a User consists of Items.

Now, I have to work with a fourth entity type: Point. I want to be able to distribute these Points on a Group, User and Item level. A Point is an entity that can be assigned on many levels.

Assuming that I want to give a point to "Group A" then a point should be associated with the group, all the users and the items of those users.

My idea for the three levels is dynamically adding new data and hence inheriting those permissions while having the ability to add the Point permission all the way down to a Item level if you decide that just a single item should be able to see it.

How would I go about making a data scheme for this scenario?

My attempt so far

My attempt at a diagram of how the significant entity types would connect in my head: 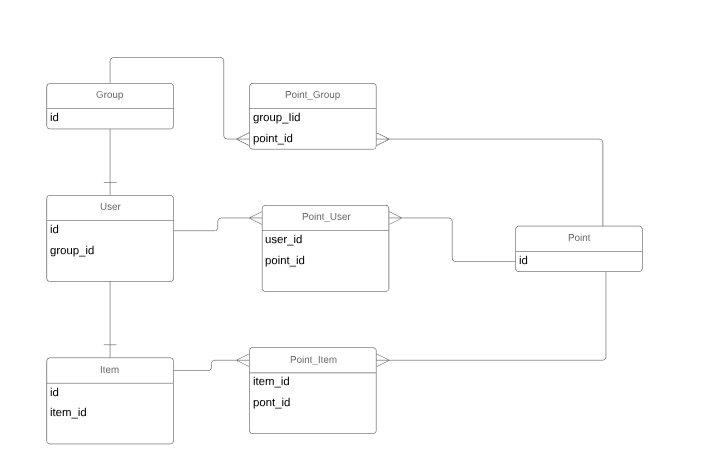 Example with assigning GROUP 1 to POINT 1:

Example with assigning USER 1 and 2 to POINT 1:

And then write some logic to determine what entries are marked based on that. I feel a bit lost.

The considerations of this design are:

To come at this another way - what alternatives do you have?

I have seen models such as this alternative implemented before, and quite frankly, I think that's a worse design. Such a design means that when you want to join from your Point to the other entity, you need to check this mapping flag column in order to make a decision about which table should be joined. It's messy, ugly and performance intensive.

There is one further alternative, however:

This last suggestion would mean you only need a single mapping table between Entity and Point. However, run through all of the above scenarios again - how will you query this if you start with, say, a Point, and want to know which Groups, Users and Items have permission to view? Getting a list of all entities would be a simple query, but if you want to list all members of all entities, you would need the entity table to join itself multiple times.

This last design may have its benefits, but I think your original proposal is the easiest to maintain and understand.

3
Learning to draw entity-relationship diagram for a scenario involving Offices, Employees and Projects
1
database design for storing individual users' items
0
Sharing Databases and Tables between users in MySQL
0
Database Schema for a User and his variable number of items
1
Modelling users and groups - but with multiple types of groups