We are hosting a SQL Server 2014 SP2 CU16 in a Windows Server 2016 64-bit environment for a customer. Performance has been fine for a long while.

On March 31 at midnight, the database server rebooted 3 times. After the reboot, the buffer cache has been roughly half the size it was previously. The customer is reporting continual performance issues.

Prior to the reboot, SQL Server was on SQL 2014 SP2 CU12. The buffer cache was consistently about 366 GB. It would drop down during nightly maintenance and return to normal afterwards.

After Windows updates applied SQL 2014 SP2 CU16, the buffer cache was about 206 GB. An admin attempted to drop the SQL max memory down and back up again and also restart the SQL Server process to regain the prior buffer cache, but the cache memory dropped to 196 GB.

The workload is the same before and after the reboot. The users do the same procedures every week, and the largest tables in the database are guaranteed to be queried frequently each day.

The following updates were installed on the morning of Sunday, March 31:

SQL memory counters for the past 7 days are below. Note the light blue line which is database cache memory. The cache memory is half of what it was, and there is a very large amount of free memory that is not being used for cache. The old pattern extends as far back as we have recorded: March 1. 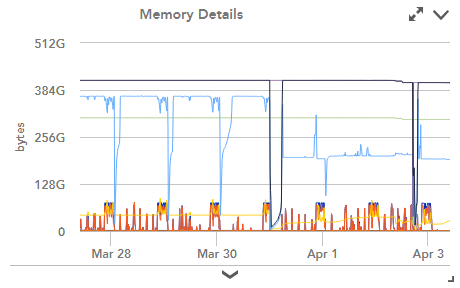 I looked through the SQL 2014 SP and CU data on the Microsoft Support site, but I did not see anything that looks like it would be related.

There appears to be 180 GB of free memory that is not being allocated to buffer cache:

We have opened a Microsoft support case. The representative asked us to run dbcc memorystatus. He noticed there are 2 NUMA nodes, but the nodes are out of balance.

Browse other questions tagged sql-server performance sql-server-2014 buffer-pool or ask your own question.