I've worked with many databases outside of visual studio. When I find myself working in Visual Studio having to work with either Oracle Express, SQLite or MS SQL Express - I have never used the DataSource feature. Now I've reached a point where I am needing to utilize the Database Explorer now called Server Explorer feature and I'm looking for an intro as well as an explanation as to the benefits of using this feature as opposed to manually coding against my databases.

The reason I'm curious now is due to my having to work on an existing project that did use this feature. Since I don't have it installed I received the below error/prompt: 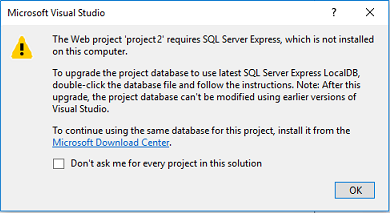 My question now is asking to know which route should I take? Do I do the work of installing SQL Server Express outside of Visual Studio and then I add it or does this installation all work seamlessly from within Visual Studio? Perhaps I'm confused and there is no different route to take and I simply just need to install SQL Express and then I add it as a datasource? This is where I'm slightly lost.

Browse other questions tagged sql-server-express visual-studio-2015 or ask your own question.