How to influence files (pre)allocation steps (max growing value) in MongoDB 3.4 with WiredTiger

We have in environment deployed some really small DBs (5GB) as directory per DB.Under dirs is LVM with XFS, where we have implemented logic for "brake" when DB space should be full-filled (all is due to some strict disk quotas - not really interesting at all I think...). Our solution runs on MongoDB v3.4.19 on CentOS 7.5. Everything looks ok.

Some of DBs has more than 60% used disk space by single collection and in our scenario we encountered that, while restoring 2.3GB dump (all into 5GB database dir/=disk, the preallocation after 2GBs asks OS for another space in (I think) power of 2 strategy (or something very similar).

This situation hits ours triggers, and eventually should lead to lock of DB (which is still better than fall of whole cluster because of no space left). Basically same situation we have with 10GB DB. (And in some way we can say that similar situation can occur with literally any capacity...)

My point of question is: Am I able to influence steps (maximum size lower than ~2GB) of (pre)allocation growing of Mongo/WT for restoring (only) or at all?

(Performance impact is not highest prioritized in this case.)

I've found some promising possibilities through db.adminCommand and configStrings for storage engines, but I was not able to affect or list some of possible parameters nor change something to turn things to good... Especially file_extend parameter of WT through

looked promising but I didn't find way to pass it to cluster... Some of tries ended with error 22 - Invalid argument, but I wasn't able to find more about...

The other found, seemed suitable for MMAP engine only - newCollectionsUsePowerOf2Sizes=false.

This makes restoring of dumps (eventually backups) into cluster much more bothersome...

Hope that issue is clearly explained and any hint/tip would be appreciated... If some additional info needed, let me know.

Update:
I've done screenshots where (I believe) is clearly visible what I'm talking about above... There are $ ls output (upper left), $ df output (upper right) and $ mongorestore progress (bottom left). (Better once to see than thousand times to hear (read)...) 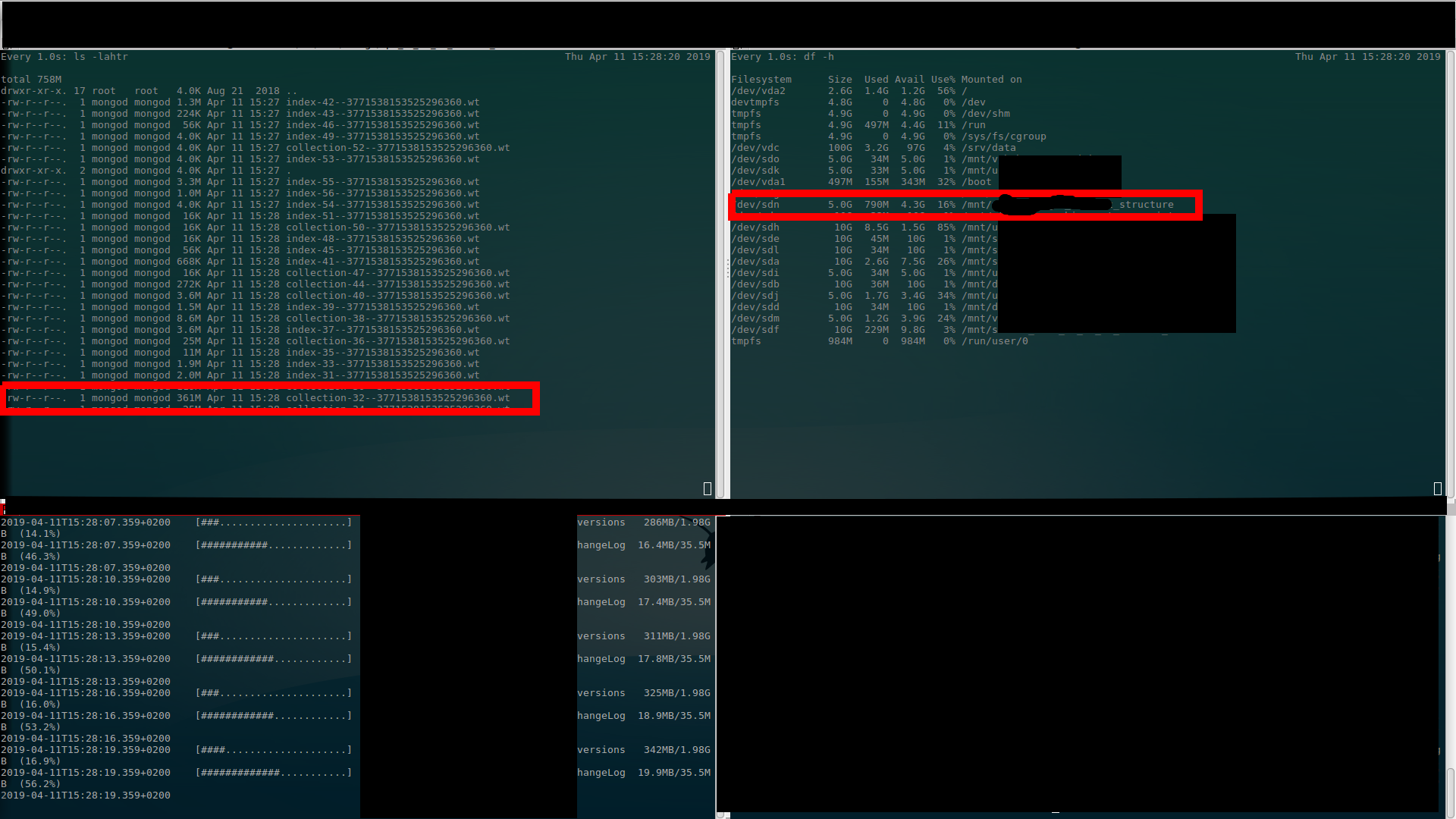 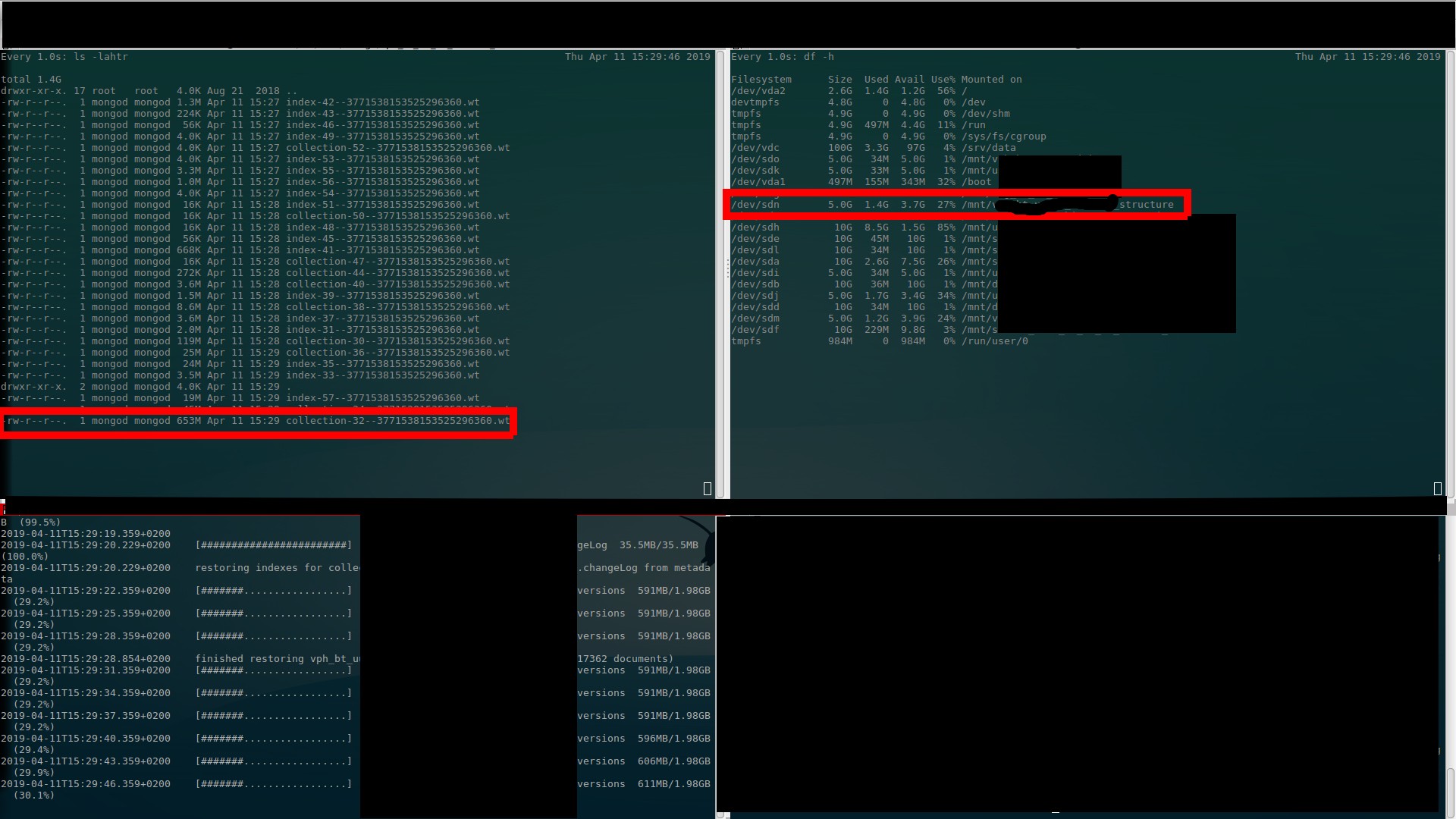 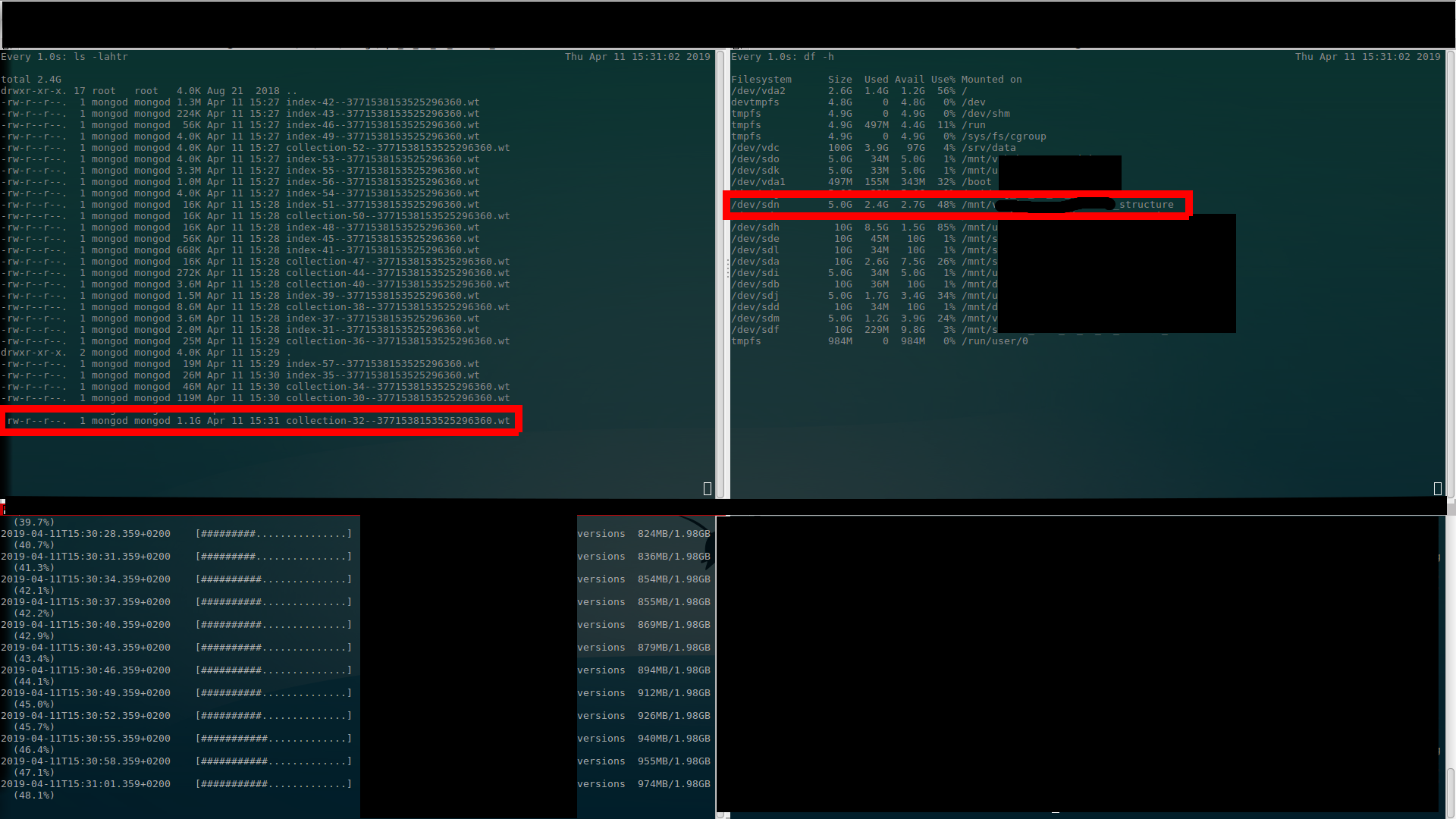 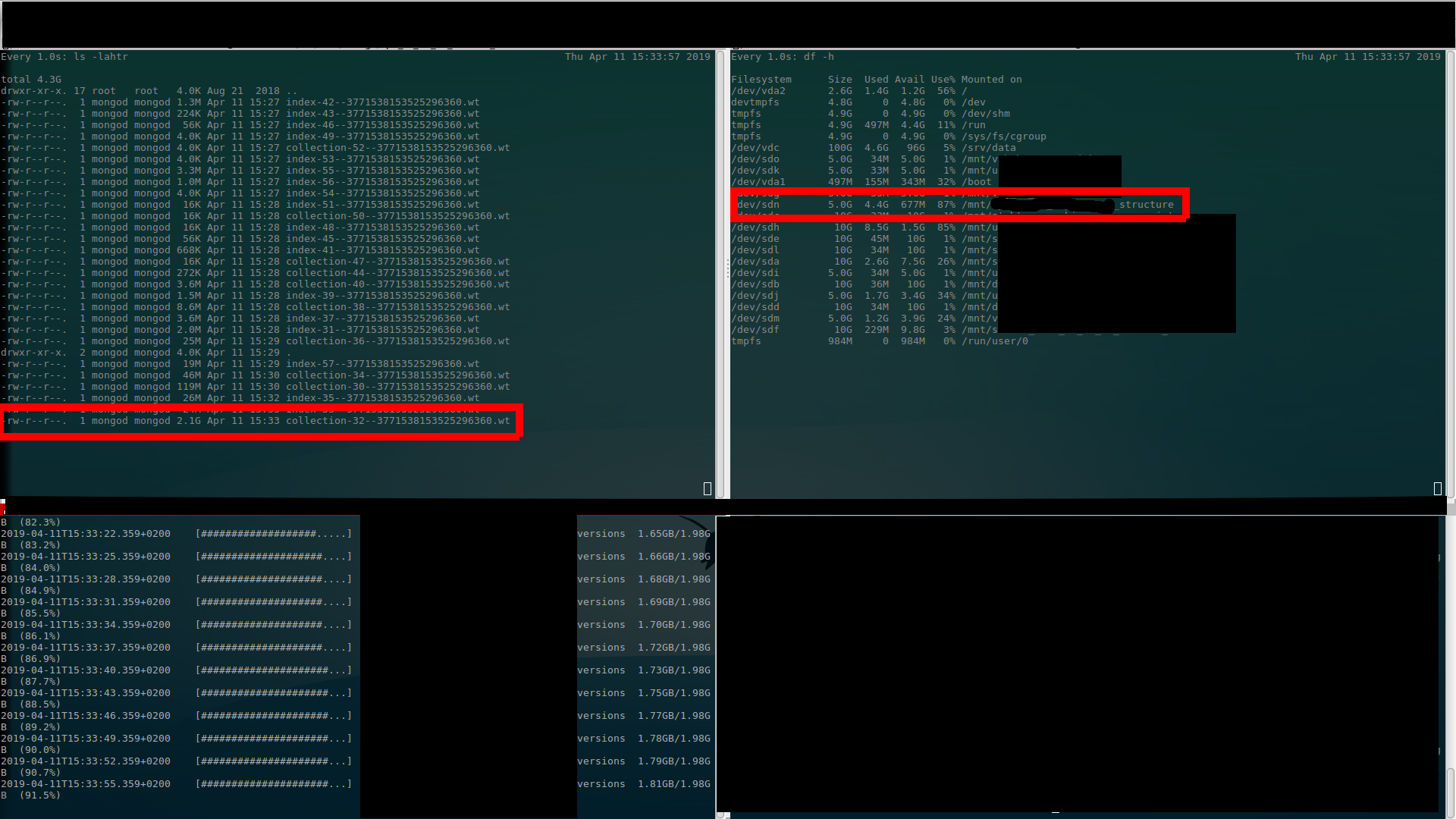 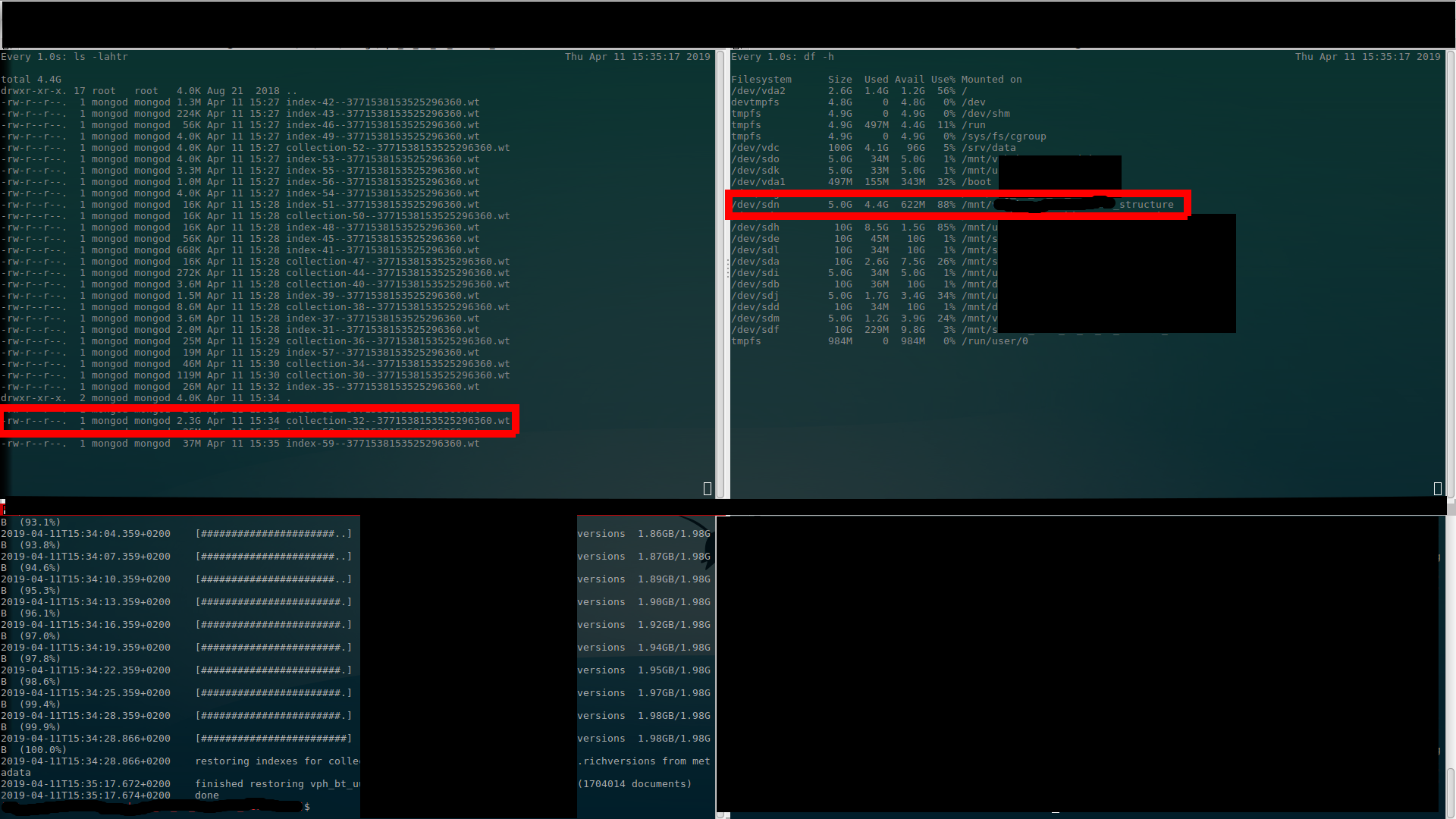 Back to normal (extra space deallocated) 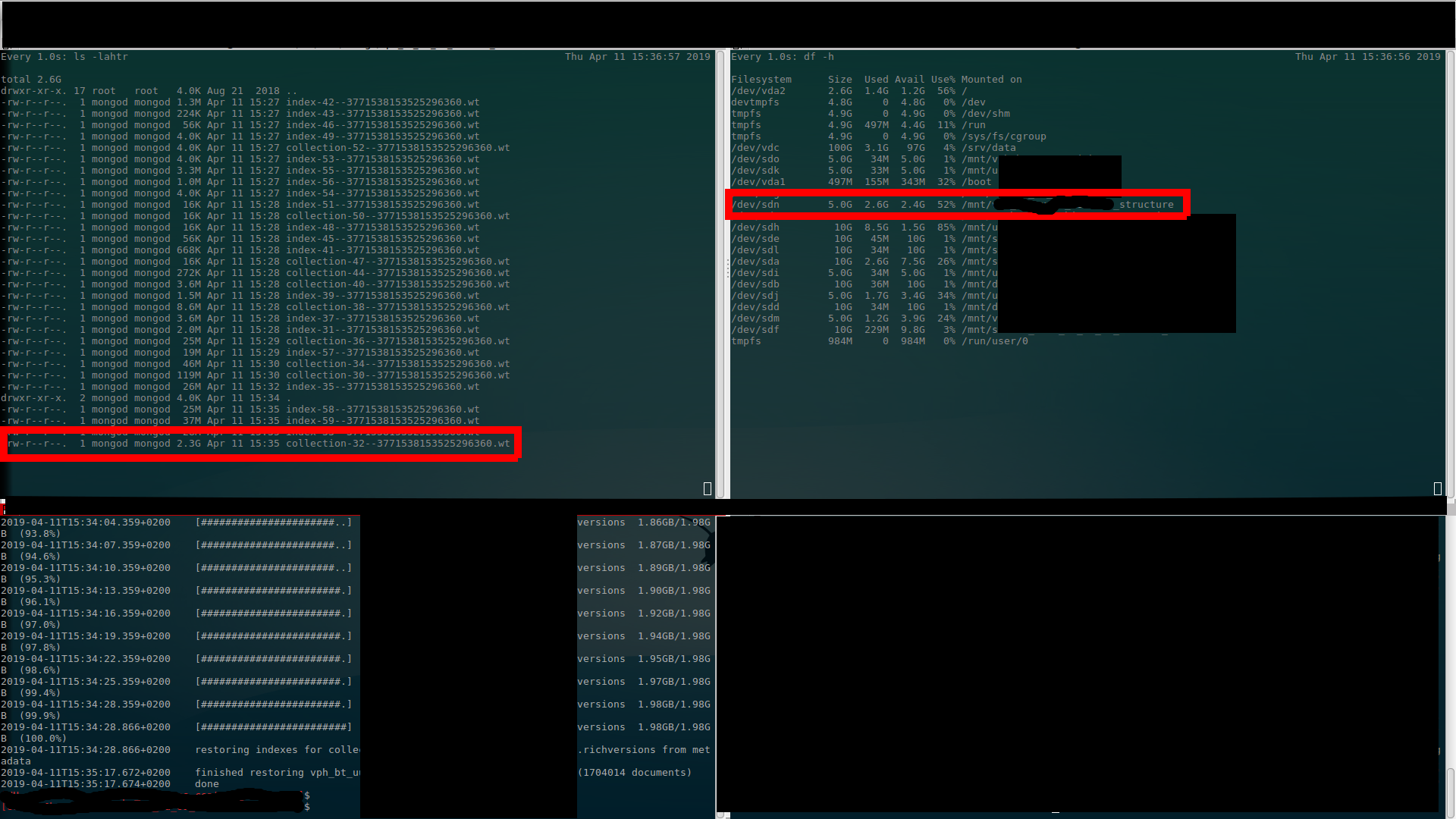 WiredTiger does not preallocate data files. Only journal files are pre-allocated (at 100MB per pre-allocation), see journaling process.

I would suggest you to allow for some temporary extra space during this restore/data load process. Once the database is in a steady state, you would see a more accurate size.

The power-of-2 preallocation is specific to MMAPv1 storage engine, which is deprecated. This is not relevant to WiredTiger.

Am I able to influence steps (maximum size lower than ~2GB) of (pre)allocation growing of Mongo/WT for restoring (only) or at all?

As per the Google group forum here Each data file will never be more than 2GB. We use a signed 32bit int to index inside of each file so we cant use more than 2^31 bytes. We have a soft limit of 16000 files per db [1] which limits you to 32TB in a single DB per process. It is mostly just used as a sanity check, so you could easily change that number and recompile to raise that limit. That said, you will soon run into the 48bit virtual address space limitation of current x86_64 cpus, of which only 47 bits is available to user space, leading to a hard limit of just under 128TB. Also, if you plan to use durability, we double-map every file so you are limited to around 64TB.

I mean a single file in the file system. A database in MongoDB spans multiple files, so this doesn't impose a limit on data set size. Yes this applies to 64-bit OSs as well. We use the same data-file format on all platforms so you can freely move your files around.

The 32-bit offset is mostly a space optimization. It allows us to point to anywhere within a single db using a 64-bit DiskLoc stuct with a 32-bit file number and a 32-bit offset into that file. This is what mongo uses internally when storing pointers to disk.

For further your ref here, here and here

Not the answer you're looking for? Browse other questions tagged mongodb mongodb-3.4 wiredtiger or ask your own question.

2
MongoDB scaling when working with files
0
How to create column group in WiredTiger engine in mongodb 2.8?
2
how to upgrade the config servers to use WiredTiger in mongodb 3.0.0
1
Isn't contradictory that MongoDB may lose updates with journaling in WiredTiger?
0
MongoDB 3.4 Sharding Error. “Cannot accept sharding commands if not started with --shardsvr”
0
MongoDB 3.4 Server not starting with bind error following a CentOS 7.4 security update
1
How many files are created by default using WiredTiger storage engine?
0
MongoDB - Does WiredTiger benefit from virtual cpus cores the same way it does with physical cores?
2
How to set a correct value for wiredTiger concurrentTransactions