Are there relations that cannot be normalized to second normal form (2NF)?

I came across this example that I can't normalize to 2NF, so I was wondering if relations that could not be normalized existed.

Here is the example relation:

with the functional dependencies:

The primary key of that relation is {C, E}, and if we suppose that all the attributes are atomic, then R is in first normal form (1NF).

But how can we normalize it to 2NF?

Since A and B are not fully dependent on {C, E}, I feel like they should be set aside in two different relations, but then D isn't dependent on anything in R. What am I missing?

database-design normalization
Share
Improve this question
edited May 20, 2019 at 17:33

Note that the normalization of a relation is an operation that in general is performed to eliminate or reduce anomalies like redundancy, while in general preserving the meaning of the data, and more formally, preserving two essential properties: the dependencies holding on the original data, and the data itself (through the concept of lossless decomposition).

So, the normalization decomposes a relation in a set of relations that are in a so-called Normal Form, and the normal forms used in a decomposition are usually the Boyce-Codd Normal Form, the Third Normal Form, or even higher level ones. For these decompositions, there are formal algorithms that can be used, and that guarantees a set of properties, like being lossless and preserving the dependency (not in all cases, for instance it is known that certain relations cannot be decomposed in BCNF without the loss of some dependency).

Note that the second normal form is not used in practice, has only an historical interest, and there are no published formal algorithm since it is more weaker that the 3NF and the BCNF.

All these topics are discussed in detail in any good book on databases, and you can find even some of them free on line.

where each schema is in BCNF.

Here is the normalization where both relations are in 3NF. 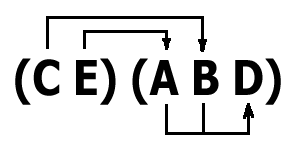