Why null is getting compared with null in the join condition in SQL Server 2016? 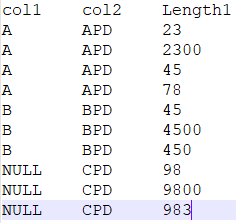 and the O/P I am getting after running following query (This is not the complete output, just showing the null part of it)

Why Null is getting compared and coming 9 times?

Maybe the column col1 for these rows has a literal string value of ‘NULL’ and not a missing value null indicator? - sqlraptor

You can test by adding the conditions and comparing the output of the queries:

Not the answer you're looking for? Browse other questions tagged sql-server sql-server-2016 null or ask your own question.