Is Network I/O included in the timings for "RPC complete" seen in SQL Profiler?

When watching results in SQL Profiler, does the RPC Complete include time to send results to the client? Or is it just the time the server spent gathering the records?

The reason I'm asking is I'm working on a program to move a large amount of data. The databases are cloud hosted in Azure, and the code is (currently) running locally. I can see the RPC call times in SQL Profiler, and the query to select the rows isn't cheap (massive table filtered by an indexed column then sorted by the table's primary key for paging results), and it isn't an insignificant amount of data (100k records per page, some situations I'm moving up to 60 million records per run).

I'm curious if I should expect it to run faster once the code is running inside Azure. If the RPC complete timing includes the time spent for the data to be sent to the client, this should decrease some (I'm hoping dramatically). If the RPC complete timing is just the time for the server to select the data, then I won't see much of an increase when it's running inside Azure.

Network I/O is included in the rpc_completed duration*, so I would expect you'll see improvement in the workload you've described.

I enabled TCP/IP on my local SQL Server 2016 instance, and then ran a series of queries through a .NET application that uses an ORM. Here's a comparison of sp_statement_completed and rpc_completed Extended Events targets for the exact same queries in that test run: 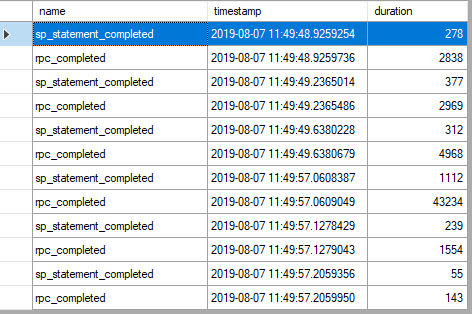 Each set of two rows is the two events for that same query.

Notice that rpc_completed is significantly higher than sp_statement_completed each time, since the latter doesn't include the network time (it's just how long a statement in a batch took to complete on the server).

For laughs, I then turned off TCP/IP, so that the queries would go through the named pipes provider: 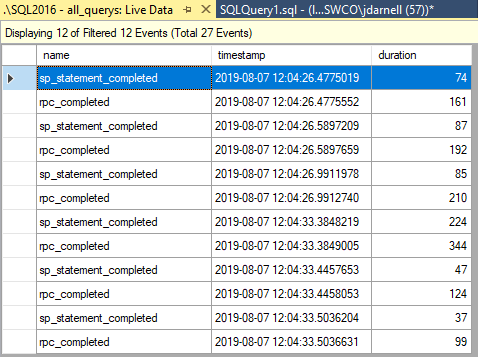 Notice that rpc_completed is still higher, but the difference is significantly less, since there's no TCP overhead going on - the "round trip" is all in-process.

*My testing was done with Extended Events, but I would suspect the same to hold true for Profiler

To be clear, network time can be included in sp_statement_completed as well in the case of "streaming plans" (thanks to David Browne for pointing this out).

Sometimes, especially simple queries with lots of results, the results aren't spooled for sending after the statement is complete. Instead the results are sent as the plan runs. This is sometimes called a "streaming plan", and it's what you'll get with a simple nested loop join or select * from a large table.

Not the answer you're looking for? Browse other questions tagged sql-server performance profiler or ask your own question.

2
Performance of Query where time captured from SP statement completed differs by large from RPC completed
2
Why should a SET TRANSACTION command show a long Duration when the CPU is low?
0
extended events rpc_completed duration does not matching with rpc_starting

9
How to implement paging in an effective way?
13
Is it possible to record incoming parameter values in a procedure call while tracing in SQL Server Profiler?
2
Logging and Replaying database updates/inserts SQL Server 2008
3
Find out beforehand how many records a query has
3
is there a way to configure Azure SQL databases for high-insert scenarios?
0
Sql Profiler: what does Duration measure for exec sp_execute
5
What interval does SQL Server Profiler's "duration" refer to?
3
Delete query not deleting data
0
Varying query runtime in tag based reporting and aggregation system