How can I run a pgAgent job every 10 second?

I have a PostgreSQL 11.3 Database. I installed pgAgent for creating jobs. Now I want to run my job every 10 second, but in GUI there is possibility to write with precision of minutes, not with precision of second. 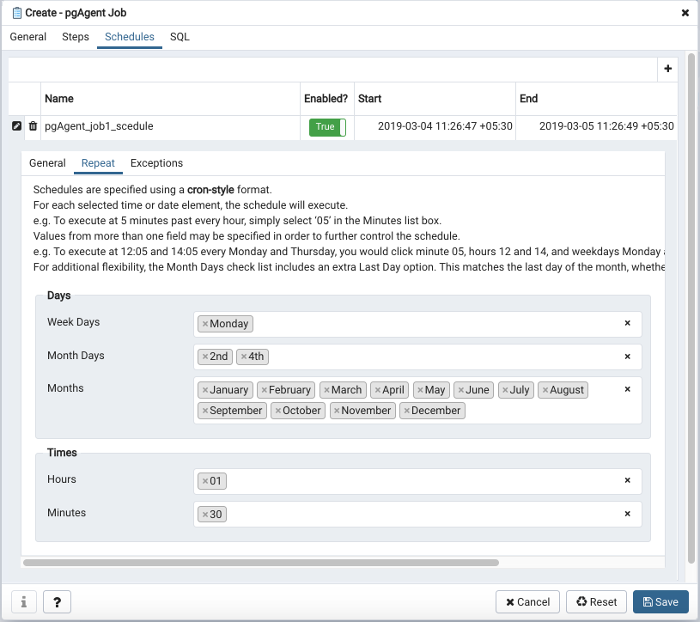 Is it possible to run job created by pgAgent faster than every minute?

As it is using a cron-style schedule definition it is unlikely to support sub-minute granularity as most (all?) cron implementations don't.

(where 5 *s means "run every minute" in cron's config files)
This removes the exactly-how-long-to-sleep-for problem (the second issue above), but potentially makes the multiple-instaces-running-at-once matter (issue three above) more of a concern. Both options are somewhat hacky...

Not the answer you're looking for? Browse other questions tagged postgresql jobs scheduled-tasks pgagent or ask your own question.

1
How to know there is a maintenance job running on a postgresql database
0
pgAgent Job's “last result” is continuously “running”
3
Oracle Jobs: Can I create a job that will not overlap with itself?
2
pgAgent doesn't run on another database than “postgres”
3
How can I limit the number of emails sent by SQL Server agent?
4
Why doesn't pgAgent run my job every minute?
0
PostgreSQLpgagent “Running at: is not runing”
1
How to stop the SQL Server Agent Job Scheduler with T-SQL?
1
pgAgent service for PostgreSQL does not run