Which costing factors go into the optimizer choosing different types of spools?

In SQL Server there are several kinds of spools. The two that I'm interested are Table Spools and Index spools, outside of modification queries.

Read only queries, particularly on the inner side of a Nested Loops join, may use either a Table or Index spool to potentially reduce I/O and improve query performance. These spools can be Eager or Lazy. Just like you and me.

You can see most of these with simple demos. Start by creating a pair of heaps:

For the first query, there's nothing to seek on:

So there's no reason for the optimizer to transform the join into an apply. You end up with a table spool due to costing reasons. So this query fails the first test.

For the next query, it's fair to expect that the optimizer has a reason to consider an apply:

But it's not meant to be:

This query fails the second test. A complete explanation is here. Quoting the most relevant part:

The optimizer does not consider building an index on the fly to enable an apply; rather the sequence of events is usually the reverse: transform to apply because a good index exists.

I can rewrite the query to encourage the optimizer consider an apply:

But there's still no index spool:

This query fails the third test. In SQL Server 2014 there was an index key length limit of 900 bytes. This was extended in SQL Server 2016 but only for nonclustered indexes. The index for a spool is a clustered index so the limit remains at 900 bytes. In any case, the index spool rule can't be applied because it could lead to an error during query execution.

Reducing the data type length to 800 finally provides a plan with an index spool:

The index spool plan, not surprisingly, is costed significantly cheaper than a plan with no spool: 89.7603 units vs 598.832 units. You can see the difference with the undocumented QUERYRULEOFF BuildSpool query hint: 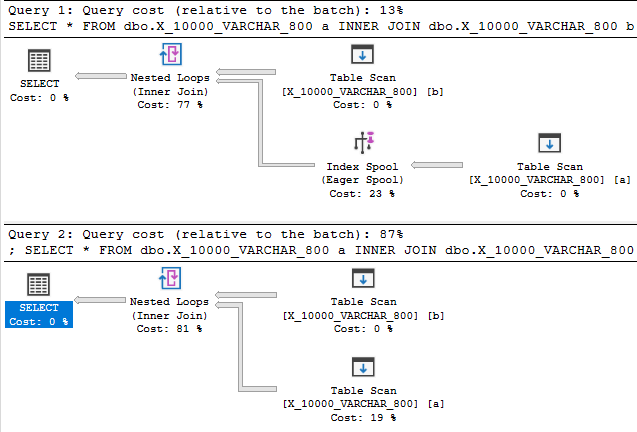 This isn't a complete answer, but hopefully it's some of what you were looking for.

Not the answer you're looking for? Browse other questions tagged sql-server execution-plan or ask your own question.

23
Why doesn't this query use an index spool?

2
Poor performance on inner join using dates and between
1
DB2 LUW: how to influence query planner's choice of join
2
Function which returns a table for a selected period of time
23
Why doesn't this query use an index spool?
4
Nested loops estimate way too low, causes tempdb spills
14
Why is a temp table a more efficient solution to the Halloween Problem than an eager spool?
10
Creating an Index that is not used by a (SELECT) query reduces performance of that query
0
How to get a parallel nested loop in postgres 12?