I have an SQL Server Agent job set up to run every minute on the minute.

Usually it runs exactly at :00 on the clock but occasionally it waits several seconds.

See below, one of the jobs was triggered to run at 6:32AM, but only actually started running 9 seconds later. 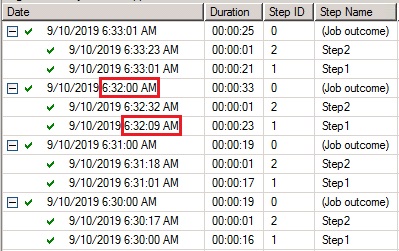 I suppose there are many reasons this could happen, but my question is: Is there any way that I can pinpoint what is causing this (as opposed to just guessing, making a change, and hoping that fixes it)?

I read this question and answer, but this is not the issue in my case. I do have other SQL Server Agent jobs, but no other jobs were running at 6:32, and also there are no other jobs that touch any of the tables involved in this particular job. When I tried running the query in the accepted answer of that question, it always resulted in 0 rows of data.

I would take a look at not just the SQL jobs that are running, but see if Windows (or antivirus) happens to be running something at that same time. I know McAfee has a tendency to run almost at random, and it can really drain my machine's resources.

Not the answer you're looking for? Browse other questions tagged sql-server sql-server-2008-r2 sql-server-agent or ask your own question.