Here is a sample file like one that I need to import: https://www.pastiebin.com/5d7782d9b63fa

Table where file has to be imported into has such a structure:

If I import using OPENROWSET/BULK then all the data is transferred correctly:

But if I try to import file using SSIS, then Chinese characters are not parsed correctly.

In Flat File Source I use DataType string [DT_STR] and CodePage 950. Then convert it to Unicode string [DT_WSTR]. 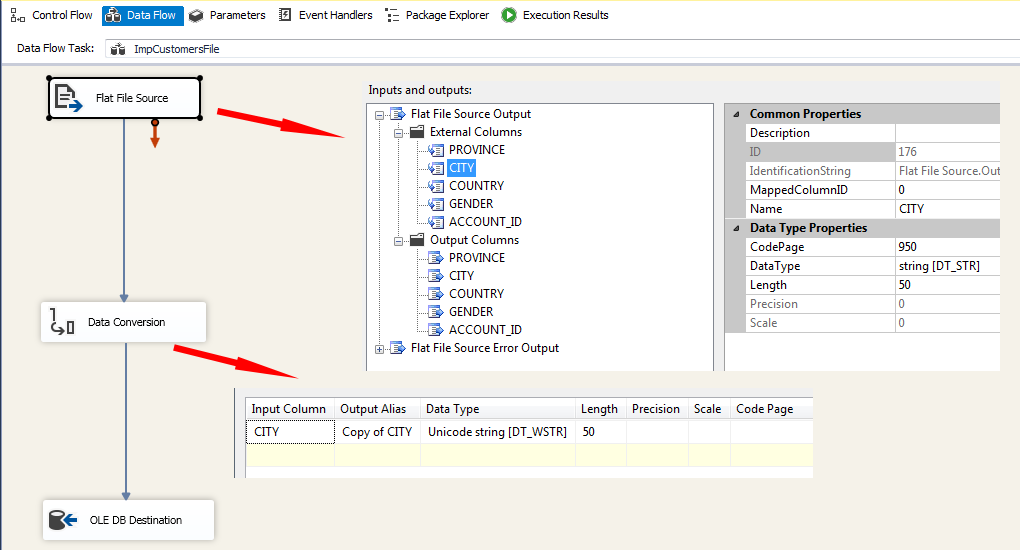 Here is how text is imported into table:

As we can see some characters are parsed correctly and some are not. What am I missing?

The problem appears to be that the lines that are not importing correctly have characters that, encoded in code page 950, having a trailing byte of 0x7C, which is valid, but also happens to be the pipe symbol, which you are using as a delimiter. For example:

Each of those two characters has a trail-byte of 0x7C. The parser seems to be viewing that as a delimiter instead of part of a 2-byte sequence for a code page 950 character. This is why you get a "?" in both "City" and "Country" with the remaining input line in the "Gender" column. The "?" in those two columns is due to the lead bytes 0xA5 and 0xB7 not being valid on their own.

The next line has the same issue:

So, this might be a bug in SSIS. Or, perhaps it's a configuration issue. Is there a way to indicate that the entire file, not just this one column, is code page 950? Dealing with code pages on a column-by-column basis, in terms of a text file, makes no sense. The entire file is encoded as code page 950, not just that one column. If it's possible to change the delimiter that might help, but it most likely just delays the problem as any delimiter can be encoded as a valid trail-byte value for double-byte characters. Given that OPENROWSET works correctly, I have to believe that this also can (although you aren't setting the file's encoding for OPENROWSET, just the column, so this could still be an SSIS bug).

Please try the following to set the file's encoding within SSIS:

Also, check the "CITY" column under "Output Columns" and make sure that it is using "Standard Parse" and not "Fast Parse" (since "Fast Parse" is locale-insensitive).

0
SSIS - Excel destination does not allow characters more than 255
7
Storing Japanese characters in a table
1
Storing/Retrieving Chinese/Unicode in PL/SQL
4
Nvarchar to varchar to nvarchar characters conversion
2
Need help importing SSIS packages in SSMS
2
SELECT query: filter unable to distinguish between two different characters
3
Setting locale for Chinese characters in Postgresql
3
How do I fix the Code Page in SSIS Lookup Transformation to be 65001?