I will preface this by saying i am not a DBA, just a dev that is trying to figure out performance problems with the following query we have.

It takes about 1 minute to execute every time, we have double checked (we think) all required indexes, ran it through index tuner and still same issues. Below is the actual plan that it creates.

Any help would be appreciated, we are using sql server 2012 express 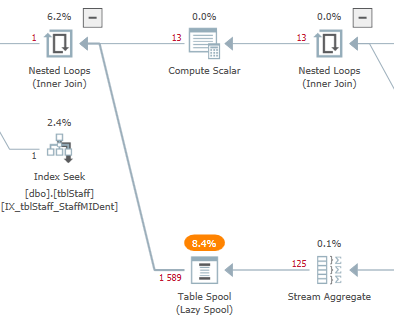 Now, for each value in the top(outer) input, the table spool will produce a rebind. No rewinds are possible for performance spools on non apply nested loop joins.

...The lazy table spool is populated once during the first loop iteration. The spool rewinds its contents for each subsequent iteration of the join. With nested loops join, the inner side of the join is a static set of rows because the join predicate is on the join itself. The static inner-side row set can therefore be cached and reused multiple times via the spool. A nested loops join performance spool never rebinds....

The low estimates result into the actual situation below: 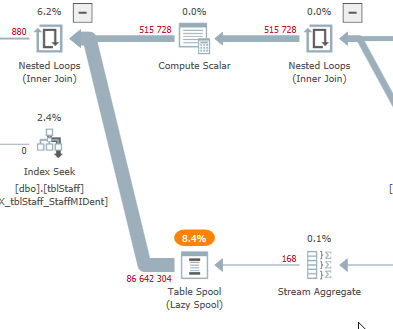 You can validate the high rowcount of the spool output by multiplying both inputs (of the compute scalar & the stream aggregate).

The first thing to fix would be fixing why the estimates are so low.

You could try updating the statistics of the table referenced in the view.

But it appears that you are doing a LIKE comparison between dbo.TblOnCall and the tables feeding the spool operator.

That can also be seen on the NL operator that gets the data from the spool.

For a longterm solution,

I would fix this LIKE comparison and any other parts that will impact your estimations gravely.

We would have to see the views to give the most correct query recommendations.

For a temporary quick fix, you can disable the spool with a trace flag or a query hint.

Performance spools can be disabled with lightly-documented trace flag 8690, or the documented query hint NO_PERFORMANCE_SPOOL on SQL Server 2016 or later. Source

An example of implementing this is running

Or better, running the query with OPTION(QUERYTRACEON 8690)

Not the answer you're looking for? Browse other questions tagged sql-server t-sql or ask your own question.