AS these question asks:

I have some doubts about clusters.

In my first job i remember we had a failover clustering with 4 nodes. There were 3 SQL servers instances on each node and a empty node for failover. If we had a problem with a node, it would failover to that empty node and not cause performance problems with a node that has already a SQL Instance.

Question: If I'm not mistaken we had a SHARED DISK failover cluster. So, every database was inside a single disk that was shared with all nodes. But what happened for an instance to change to the empty node? I mean, there were no SQL instalation there, no instance, but after a failover, the instance was there with all its jobs. Does this mean that the virtual machine went to the empty node?

Now I have a new job and I still can't quite understand te concept of clusters. We have a failover cluster with 2 nodes. Here I created an Always on availability groups environment. It works great ( The only problem is we have no quorum yet but we will get there ). The environment here is different. I had to install 2 SQL Server instances on each node. And this is where I would like to reach.

( I had 0 sql knowledge when I started at my first job so I really cant remember what was the configuration ).

SQL Server software is installed on each node, however, the instance that is installed is a special instance that is clustered - a Failover Cluster Instance. The WSFC service manages the failover of the SQL Instance and Shared Disks between nodes to provide high availability and disaster recovery. The SQL Server service for that instance exists on all nodes but is only started and running on the active node of the cluster.

For all intents and purposes, there is only one instance and it moves between nodes along with its underlying Shared Disks. Data synchronisation between the nodes is achieved by using the same underlying disks, so data states between nodes are identical.

A SQL Server Always On Availability Group (SQL AG) is a modern solution for high availability and disaster recovery that does not require Shared Disk infrastructure (in fact, even a WSFC cluster is not required in some cases, but that's a different topic).

It still utilises a WSFC cluster to manage failover and availability, however, the synchronisation of data between nodes does not leverage shared disks to ensure data is up to date, instead, a mechanism is used entirely within SQL Server to transport blocks of data between nodes, or Replicas as they're called in an AG.

When an AG is created between these replicas, the data movement mechanisms begin moving data between the replicas for the databases that are joined to the AG. This is very similar to, and built on the same technology as, database mirroring from earlier versions of SQL Server. Data synchronisation is achieved using this 'mirroring' technology.

A Standalone SQL Server Instance is quite simply a SQL Server instance that is not linked or joined with another through HADR technology. As the name suggests, this instance stands alone.

Question: If I'm not mistaken we had a SHARED DISK failover cluster. So, every database was inside a single disk that was shared with all nodes. But what happened for an instance to change to the empty node?

I mean, there were no SQL instalation there, no instance, but after a failover, the instance was there with all its jobs. Does this mean that the virtual machine went to the empty node?

Actually, SQL Server was installed on that node. The VM did not move, the instance and all of its DBs, jobs etc moved when the disk hosting the files moved. The SQL Server service on node 2 started up after failover and reconnected to the instance files.

In the new environment, it sounds like they have installed an Always On Availability Group architecture.

Quorum is supposed to be the tie-breaker - if both nodes vote that they cannot see the other one, then each would want to take over the primary role (FCI or AG) and this would lead to split-brain. The WSFC cluster won't let this happen and will shut down the cluster instead.

Quorum gives you a deciding vote when you have an even number of nodes. If the cluster service on node 1 cannot communicate with node 2 but it can communicate with the quorum witness (file share or shared disk), then it has two votes (one from the node and one from the quorum witness) and node 2 only has one vote. It is overruled and node 1 stays live. If Node 2 has the two votes then failover is initiated.

Below is a diagram from Microsoft that helps illustrate the differences: 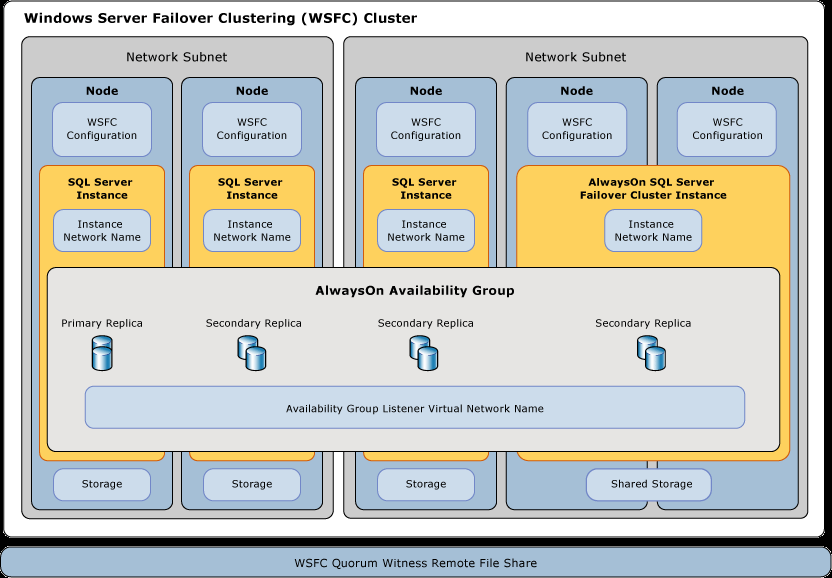 As you can see from the diagram, an Availability Group is built across independent instances of SQL Server installed on servers joined to a WSFC cluster. A Failover Cluster Instance is installed as a single instance of SQL Server across multiple nodes in the WSFC cluster, using Shared Storage.

Even though the binaries and executables for SQL Server are installed on all nodes in an FCI, the instance (system databases, user databases etc) is installed on shared storage and is only active on a single node at a time.

In an AG, both independent instances are up and running at the same time, and the AG Listener (a virtual network name) only listens on the primary replica.

This link provides detailed information about business continuity in SQL Server, including AGs and FCIs.

Not the answer you're looking for? Browse other questions tagged sql-server sql-server-2014 clustering failover or ask your own question.