SQL Server Stolen Server Memory - what it consists of?

Below what my server's performance counters show: 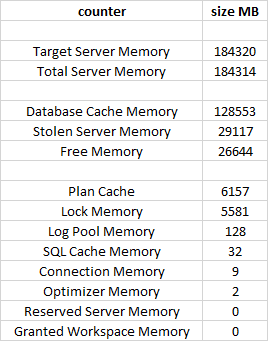 2) How can I query rest of things that are included into "Stolen Server Memory" ?

What "Stolen Server Memory" consists of ?

I will quote from my answer given on This Thread.

Stolen memory describes buffers that are in use for sorting or for hashing operations (query workspace memory), or for those buffers that are being used as a generic memory store for allocations to store internal data structures such as locks, transaction context, and connection information. The lazywriter process is not permitted to flush Stolen buffers out of the buffer pool.

Plan cache is not part of stolen memory.

How can I query rest of things that are included into "Stolen Server Memory" ?

AFAIK their is no query to tell what "actually" stolen memory consists and how much. You can run DBCC MEMORYSTATUS() command to see the value of stolen memory.

Not the answer you're looking for? Browse other questions tagged memory sql-server-2017 memory-manager performance-counters or ask your own question.

3
SQL server Memory components
0
SQL Server target/total server memory is not equal to sum of database size in dm_os_buffer_descriptors
1
How does SQL Server determine how much memory to allocate to Data cache
3
Understanding Stolen and foreign memory usage between 2 app database servers
1
Do I need to add more memory to my SQL Server 2008 R2 instance?
3
SQL Server memory