What does "sample_ms" and "num_of_reads" means in "sys.dm_io_virtual_file_stats". what is the interval time of stats

As per MS-Docs it returns the Number of milliseconds since the computer was started, but i'm getting different result when i compare with actual server start time in sys.dm_os_sys_info.

Here are the queries:

This is the result: 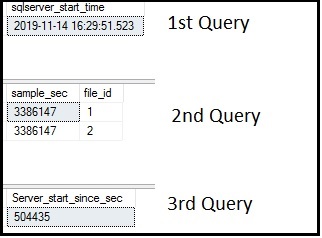 If sample_ms reflects computer/server start-time not the SQL Instance's start-time (comparing 2nd vs 3rd in result screenshot). Does it mean the statistic values (num_of_reads, num_of_writes etc..) in DMF (sys.dm_io_virtual_file_stats) returns cumulative reads since the computer restart or since the SQL Instance restart or there is different interval time that we need to consider?

First, these start values are not measuring the same thing.

sample_ms - bigint- Number of milliseconds since the computer was started. This column can be used to compare different outputs from this function.

Does it mean the statistic values (num_of_reads, num_of_writes etc..) in DMF (sys.dm_io_virtual_file_stats) returns cumulative reads since the computer restart or since the SQL Instance restart or there is different interval time that we need to consider?

It should be cumulative reads/writes on each file ("Total number of bytes read on this file") for the current instantiation of the instance, i.e. since it was last started. The original function that this dmf replaces, sys.fn_virtualfilestats returned a timestamp column to help compare results received over time ("Database timestamp at which the data was taken").

Now that this is a dmf, it appears as though sample_ms fills that void based on its description:

This column can be used to compare different outputs from this function.

In most realistic cases the only thing reading/writing to SQL Server's data/log files is itself, so these would not be incrementing unless the instance was started anyways. Regardless, it does not appear the intent is to use this counter for any purpose other than comparing multiple outputs over time.

I was unable to find a canonical reference saying that all dmvs reset on instance restarting, but some of the index based dmvs' documentation do specify this:

The counters are initialized to empty whenever the SQL Server (MSSQLSERVER) service is started.

Many of the dmvs do not return information that is cumulative, so it doesn't make sense to describe them as being reset on an instance restart. However, this one does appear to fall into that category and should be noted as such.

I've made a pull request to updated the documentation to reflect the fact that it resets on instance startup.

Not the answer you're looking for? Browse other questions tagged sql-server sql-server-2016 dmv or ask your own question.

23
SQL Server not starting at Windows startup but starts manually
2
What means Command column in sp_who2 and text column in sys.dm_exec_sql_text?
3
SQL Server 2008 Edition Upgrade Enterprise Evaluation to Standard problem
12
What does the "reads" column in sys.dm_exec_sessions actually indicate?
14
TempDB contentions
0
The SQL Server (MSSQLSERVER) service terminated unexpectedly. Event ID: 7034
5
dbo.SORT temporary run storage: 148643705716736' What does this number means?
11
What does it means when you have "sql_exit_invoked" in System Health?
1
SQL server - data successfully inserted in a table but not returned in Select Statement
1
What could be the cause for my high disk IO latency (from sys.dm_io_virtual_file_stats DMV)?