I have a line graph showing water level data.

The graph has a tool tip which displays the values when you hover over with the mouse. See below. 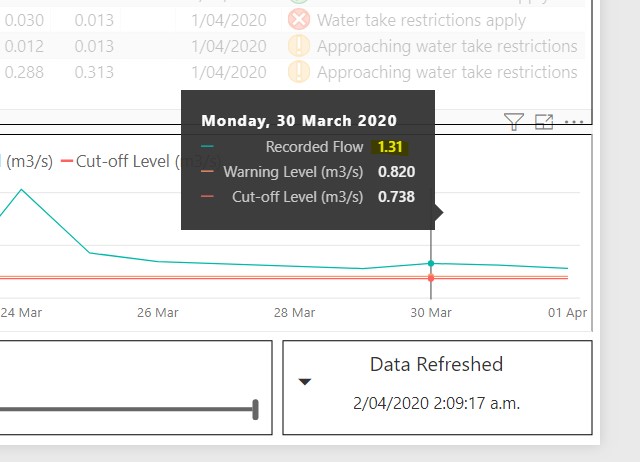 My problem is that the number of decimal places displayed for Recorded Flow is different. I want them all to display with 3 decimal places.

All three values are stored in an SQL using a float datatype. The Warning and cutoff level values are a single value (which could be 1, 2, or 3 decimal places but displayed to 3 decimals), where as Recorded flow is a variable time series stored to 8-10 decimal places, but only ever displays as 2 decimal places. (and I want 3.)

I can't see anywhere that the datatype is altered or that the values have been rounded. I have removed and re-added the time-series, and changed the order of appearance but it makes no difference. I've even rounded the data in SQL to see if PowerBi was sniffing the data to determine formatting.

All web search results I've found talk about the lack of formatting control, but not that they're inconsistent or appear differently.

What am I missing?

The answer is embarrasingly simple. in PBIRS:

Not the answer you're looking for? Browse other questions tagged powerbi or ask your own question.