Why can't SQL Server find a seek plan? Is this a bug?

this query fails Query processor could not produce a query plan because of the hints defined in this query. (if I remove the forceseek hints then it runs but it will scan one of the two tables - even if it's extremely large)

..I don't understand why SQL Server doesn't run the first query optimally. Is this a known issue? Does it have a name?

For the original query in question optimizer considers(*) two main alternatives normally (when FORCESEEK hints aren't used on any of the tables).

First one is simple join

when indexes from both tables are scanned entirely (without predicates), and predicate a.Id = b.Id AND (a.H = 'A' OR b.H = 'C') is tested at join node.

Second one is apply form (more about it here)

when index on one of the tables is scanned on the outer side of the Nested Loops join, and then index data is used on the inner side to seek into clustered index on the other table using b.Id = a.Id seek predicate and additional a.H = 'A' OR b.H = 'C' predicate. It can be expressed in T-SQL as

When FORCESEEK is used on one of the tables, simple join alternative falls out from consideration, but optimizer additionally considers modified form of apply

There are more alternatives actually (that use spooling on the inner side of the apply, for example, or different physical join implementation for simple join, or non-clustered index scan instead of clustered index scan, or vice versa, etc.), but above execution plans shapes are quite representative.

So, I think we can say, that possible implementations of the original written form of the query require FORCESEEK requirement to be relaxed for at least one of the tables.

You have another equivalent query, but discovering such alternative is not implemented in the current version of query optimizer unfortunately. This is not a bug though, just imperfection.

Notice also that you add FORCESEEK to convince optimizer to seek in the non-clustered index, but in the above cases optimizer understands it in its own way and performs seek over clustered index instead. Rewriting query, when its performance is not satisfactory, is one of the first (and right) things to try often.

(*) One may find it out by analyzing final memo structure and applied transformations (using undocumented trace flags 8615, 8619 and 8621).

I don't understand why SQL Server doesn't run the first query optimally. Is this a known issue?

It's not that SQL Server is not runnig the first query optimally, it's just that it can't run at all. The Hints doc says:

To understand the problem caused with that query let's observe the query plan of part of the query that executed the way you wanted:

And here's the query plan generated: 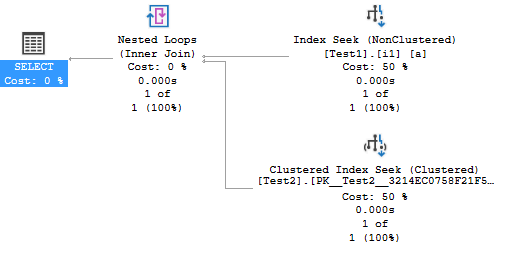 Notice that SQL Server did the first seek on the nonclustered index i1 to find a.H = 'A' and with that result the second seek (the one related with the join clause on a.Id = b.Id) could occur on the clustered index of the table Test2.

The problem when we have where a.H = 'A' or b.H = 'C' is that if SQL Server did the first seek on the nonclustered index i1 to find a.H = 'A' and with that result proceeded to do a second seek for the join on a.Id = b.Id, it would eliminate the rows that didn't match the clause on a.Id = b.Id and with that the predicate b.H = 'C' could not be correctly verified because some rows that would match it could already have been discarded by a forced join seek. Since it can't risk to generate a wrong resultset, SQL Server throws 8622 error.

Joins with multiple conditions separated with OR have long been problematic. Over the years, the optimizer has added new tricks like converting them to equivalent UNION forms, but the transformations available are limited, so it is quite easy to come unstuck. (emphasis added)

So it's possible that the convertion you desired is not on the list and without that possibility, it doesn't have an option at all. A case for 8622 error.

Not the answer you're looking for? Browse other questions tagged sql-server query-performance optimization sql-server-2019 or ask your own question.

4
Combine Table Hints INDEX and FORCESEEK with Two Joins Not On PK
6
Identical query, tables, but different EXPLAIN and performance
15
Index on a persisted computed column not seekable
2
Force Sql server to use index seek in merge join
6
Optimizing a simple query on a large table
1
Slow running query using date range on non-clustered index column
2
Why can't the query processor produce a query plan with a FORCESEEK hint when I'm INNER JOINing by the clustered index on both indexed views?
2
Can the FORCESEEK query hint be used on tables being queried against on a linked server? (I.e. as part of a distributed query)
0
Receiving “Query processor could not produce a query plan because of the hints defined in this query” when using FORCESEEK but can use FORCESCAN?