What is the best way to include a large amount of configuration data in a SQL project?

I have a BIDS SQL Server Database Project with a database that I publish dynamically to various servers (SQL2016). It initially starts blank and everything is parameterized. Everything is in Azure DevOps and deploys to places.

I want to include/pack in (mostly static) configuration data for a few tables. Initially I used the script wizard to script the tables, then just put that script text in my post-deployment file (InitConfigs.PostDeployment1.sql).

I've come across one config table, when scripted, is a nearly 600mb script. The size isn't the problem, it just seems like there must be a proper/better way to embed it in the project.

Is there some sort of data package dacpac/bacpac-style file that can wrap everything up nicely and can be easily imported? Perhaps compressed too?

Your intuition is right here - it's not common to have a 600 MB SQL script as part of your SSDT project in source control.

Especially in the world of distributed version control systems, like git, you're talking about potentially numerous copies of that file, on various machines, and tracking the history of it in detail.

However, there is no "built-in" way of dealing with static data other than post deploy scripts, as you've noticed:

One solution would be to create a one-time-use SSDT project, and all it has is your configuration data scripts. Then you can produce a dacpac file from that (which is really just a compressed folder), and "reference" that dacpac in your main project.

The advantage of this approach is that you get a compressed deploy script, but it's in a format that easily fits with your existing deployment pipeline (rather than just throwing the script file into a .zip archive).

I have an SSDT project with the AdventureWorks sample database schema in it. The resulting dacpac is 80 KB: 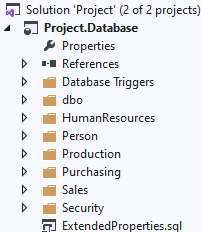 I'll create a second project, and all it contains is a Post Deploy script, which references my static config data script:

This produces a dacpac file that is 34 KB.

Based on that compression ratio, which depends a lot on your data, your 600 MB could get as small as 2 MB (there is a lot of repetition in a script like this, which lends itself to good compression).

Then you can add the dacpac as a "Database Reference" in your main SSDT project: 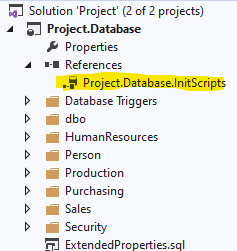 At this point, you could discard the "InitScripts" project. Or you could store it in a separate standalone repository, that less people will need, in case you ever need to update and regenerate the dacpac.

Note that, in the end, your build / deploy process will need to deploy both dacpac files - your "main" one, and the "InitScripts" one only on initial setup (or you could deploy it every time, and have the init scripts check for existing data before taking any action).

Not the answer you're looking for? Browse other questions tagged sql-server sql-server-2016 export ssdt bacpac or ask your own question.

2
Copy database wizard-generated job blows up log file; alternative?
8
DACPAC and database drift: db users are always detected as drift even when nothing has changed
2
How does SQL Server handle SSIS project deployments, and what is best practice executing these packages?
1
SQL Server and TFS - How to rename stored procedures
0
What is the best way to remove large amount of data from large tables?
3
Missing master.dacpac publishing dacpac Azure Devops
2
Error creating memory optimized filegroup in SSDT
1
Is there a way to migrate data from one server to another after running SQL Server Database Deploy in Azure DevOps?