I had and idea for a table design a little while ago that made sense to me at the time. In recent history I have realized I have a habit of "over engineering" or spending too much time trying to "over optimize" solutions. I am assuming that this is one of those instances where I am over thinking the solution and will create extra overhead with little to no actual gain.

Assume for an object (a Shipment table for example) there is some kind of NOTE varchar(MAX) data element we want to keep track of. The NOTE column has the opportunity to have data pushed into an overflow and dramatically increase the size of the row (thus limiting the number of rows that can be saved on the page). As I understand it, this then negatively impacts the execution time of various operations on the table as a whole. 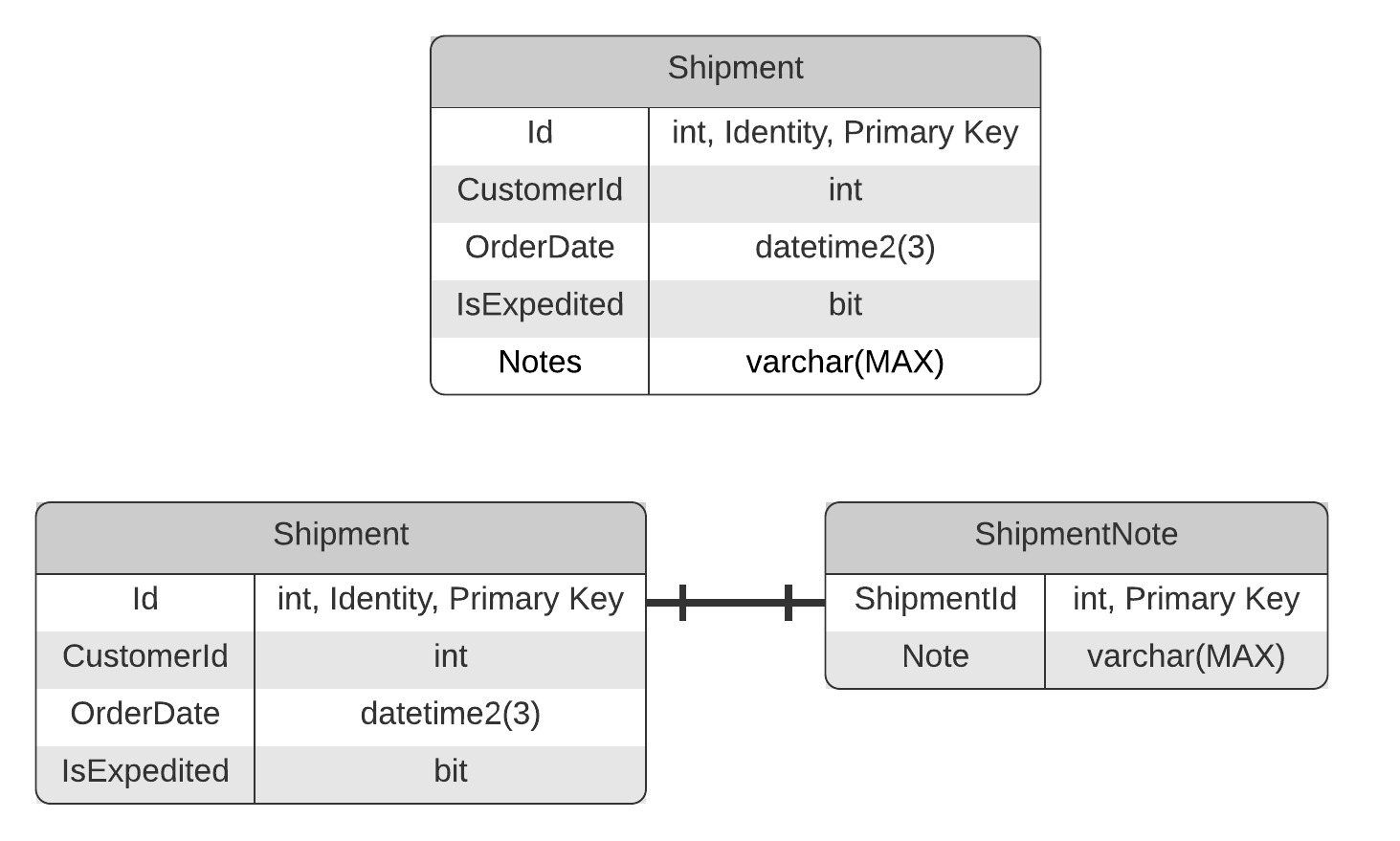 The main use case where this might be a good idea is if:

The disadvantages I am seeing (outside of this may not actual make noticeable improvements in working with the Shipment table outside of the Note column):

sql-server database-design varchar
Share
Improve this question
asked May 22 '20 at 20:22

While its great that you are even thinking about this - I would consider it to be micro-optimisation. SQL Server already has optimisations built into it for handling NVARCHAR(MAX) and so generally I would say to not second guess it until it becomes a problem. However, there are two main points that came to mind when reading your question.

The first is (as you touched on with your last point) would there actually be any performance gained by splitting the data out into another table over letting SQL Server optimise the pages and data itself? I don't have hard evidence with me right now but I suspect not. The reason is that, as you mention, your data is regularly over 8000 bytes and therefore will be moved to LOB pages in your Note table anyway. You would just be moving the perceived problem from one table to another. Add the overhead of performing a JOIN when having to fetch the data and you are likely end up slightly worse off than you were to begin with.

Secondly, as you tagged the question with database design, my actual recommendation is that you do split out the notes into another table. However, my reasoning is not so much driven by the performance optimisation but more specifically adding flexibility to the application. It is highly likely that a shipment may need more than one note attached to it (for example if it is delayed on transit, or a customer calls in etc...). If you have the note on the actual shipment itself it makes it harder to do this without duplicating data. If you extract it into its own table you will be able to assign multiple notes to a shipment, and track who entered them and when. This makes your application and database more flexible.

If you want to optimise then I would recommend removing the need to query the notes unless someone specifically wants to view them (such as having a dedicated form in your application to do so). That way, you only need to perform the join/lookup when somebody explicitly wants to view the data. Even if you didn't externalise the notes to another table, not including the column in the query if it is not needed will remove the need for SQL Server to read the LOB page. If possible I'd always optimise queries to return the least amount of information required before optimising at a micro level.

The simple answer is no, unless you have an application that always fetches all the columns for the table and you need to prevent it from retrieving the notes for every time it queries a Shipment.

If you decide to you can instruct SQL Server to never store the notes on the row, and use a pointer to a seperate LOB with the table option 'large value types out of row', and can even push those LOBs to a separate filegroup by setting the TEXTIMAGE_ON option in CREATE TABLE.

Not the answer you're looking for? Browse other questions tagged sql-server database-design varchar or ask your own question.

3
Should I create a separate user table for different web products within the same platform?
8
Should I separate frequently updated columns?
9
PK as ROWGUIDCOL or use a separate rowguid column?
4
Is it ok to have 'view count' column in the same table?
2
Extracting 'hot columns' into a separate table
13
Understanding varchar(max) 8000 column and why I can store more than 8000 characters in it
2
Name for a "lookup" table with values in separate rows
5
Do varchar(max), nvarchar(max) and varbinary(max) columns affect select queries?
1
SQL Server - Physical Table Design - Column Order - Null and Non Null Columns