I am using SSDT to create a database containing CLR user defined aggregates.

The aggregates are intended to sit in different schema. That is not possible with CLR objects inside SSDT, without using a post-deployment script to move the objects after deployment.

What I am attempting to do is:

I then create a wrapper in the Stats schema like so:

This works without error when I build via debug. I have my debug connection set to a named instance of SQL Server. If I press F5, it compiles and deploys without any problem. The code is now usable on the server, including the wrapper.

But, if I attempt to publish to a server using Publish, it does not work. Instead it fails with:

There are no further error messages either in the Data Tools Operations panel or error list. ssdttrace shows no useful information:

Previously I was also getting errors indicating that the assembly AnalysisFunctions had an unresolved reference due to the use of EXTERNAL NAME - again working via debug, not via publish. But now that error has mysteriously vanished.

Does anyone have any idea what this error might be, or how I can debug it?

I can't reproduce this problem using the same version of SSDT as you. I do have a slightly newer Visual Studio (15.9.24), but I'd be surprised if that matters. Here's my (very minimal) setup, please let me know if I've misunderstood some part of your scenario: 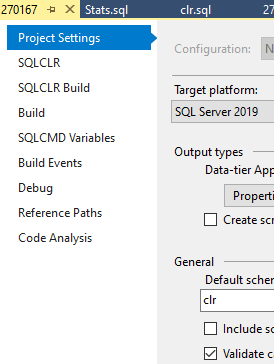 Normally that failure during preview generation indicates that there are objects in your target database that don't exist in the SSDT model (dacpac). That's discussed on Stack Overflow here: SSDT Publish errors on Creating Publish Preview

You can use the "Schema Compare" feature to check and see if that's the case for you.

If there are no conflicting objects in the target, then it would be helpful if you could edit your question to include your publish settings (the ".publish.xml" file, or at least screenshots of the "Advanced" window when publishing). It could be some odd combination of options causing the problem.