How can I get a copy of the SQL generated by Management Studio?

If I save a table in Management Studio's Table Designer for example, I believe it runs DDL SQL in the background. Is it possible for me to grab this SQL so that I can save it to a file?

Modern versions of SSMS (2008+ at least) allow you to generate a change script once you have made changes to a table using the graphical designer. You go to the menu item Table Designer > Generate Change Script. 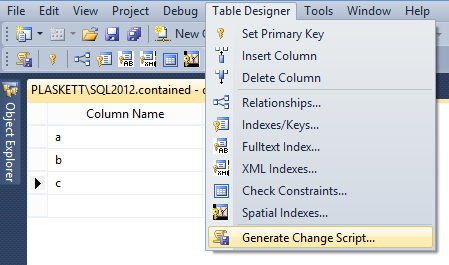 That said, I agree with Thomas. In the long term, you should be proficient at T-SQL so that you can write ALTER TABLE scripts without the help of the wizard / graphical designers. They often do things you don't want to do.

You can just go to the table after it is created in SSMS and right click and then select the Script options in the menu.