How Are SQL Server Clients Connecting?

This post is slightly different than my first post, because in the last post I overlooked a critical detail with the default, unnamed instance, which was I could find no evidence that any of the TCP addresses were enabled. Here is some background:

I have a Windows 2016 server with an unnamed and a named MS SQL SERVER instances installed. TCP and Memory connections are turned on for both, until you get to the protocol section for TCP.

The unnamed instance was installed first, and hence was assigned port 1433. The firewalls on the server and the client (Windows firewall) are set to allow the necessary UDP and TCP traffic.

Here are two pictures denoting most of the port configurations for the unnamed instance. Please note enabled is set to No for all settings, there is no dynamic port, and the port used is 1433. 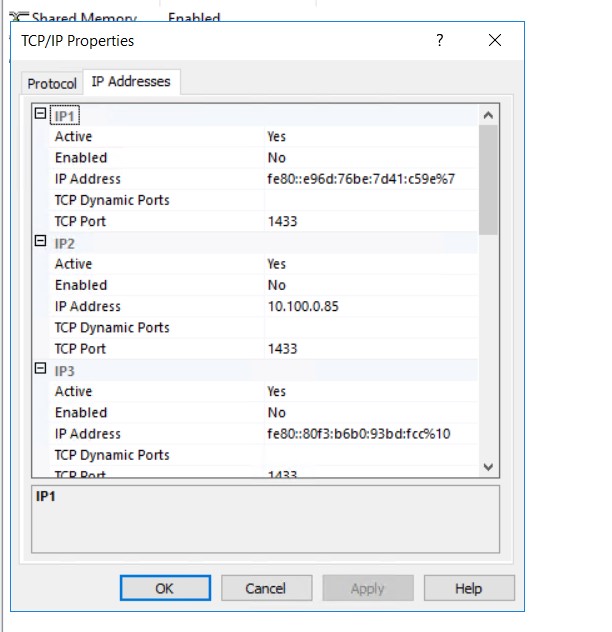 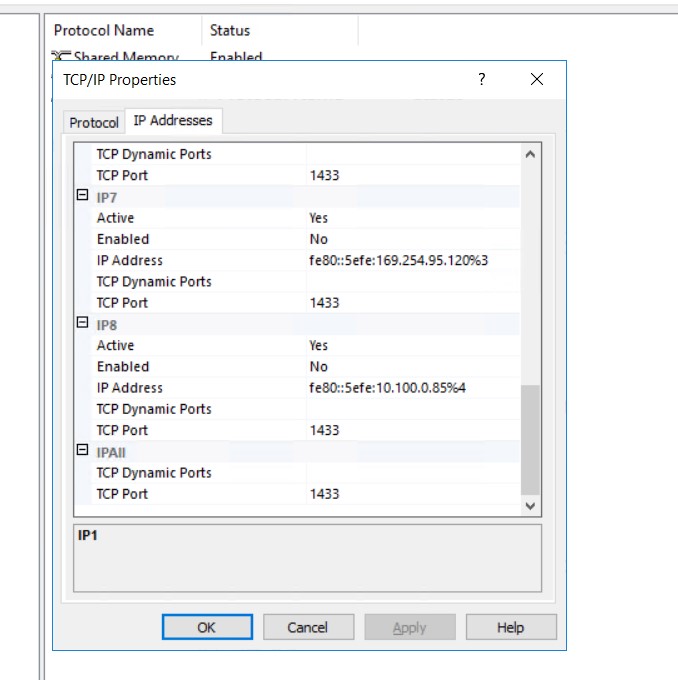 I've tried all suggestions in the prior post, read on-line, and my named database was able to do an import from an older SQL Server database, 2008.

Using netstat, I can see port 1433 is in use, so there is no point in co-opting it for the named instance. Should I just pick a port I know won't be used, or is not likely to be used?

I believe we have several misunderstandings here, so lets try to sort them out one by one and see if that clarifies the big picture in the end.

What you refer to as an "unnamed instance" is what we call a default instance. Just as FYI.

It is not the first installed instance that get port 1433. 1433 is a Well Known Port for the default instance. This is from back in the days when we couldn't have more than one instance (pre-SQL Server 2000).

A named instance get a port number from the Windows dynamic range at first startup. "Dynamic" does not mean a different port number at every startup. The assigned port is stored in the registry and is attempted to be used at following startups. "Dynamic" controls what happens if that fails (i.e., the port last used is now busy). "Dynamic" means "get a different port from Windows". The other option means "fail to start SQL server".

What you see in the GUI you posted as an IP being "disabled" is bad GUI presentation. The individual IP sections are being overridden by the bottom-most config (IPAll). Having a port there means all IP addresses are using that port (as far as I understand). Readers are welcome to comment/edit here.

As for your named instance, I suggest you set the port number under IPAll to 0 (and have nothing for the "static port") and re-start your SQL Server. It should now get a new port from the dynamic Windows range.

I have a solution, but not necessarily the best solution. I took the assigned dynamic port 43965, treated it as a permanent port; assigned it the named instance, and I can connect using the dbname,port# .

Is there a one and only preferred way to use the dynamic port that was assigned when the named instance was installed?

Not the answer you're looking for? Browse other questions tagged sql-server sql-server-2016 import connections or ask your own question.

3
Remote access to SQL Server 2008 R2 on Windows Server 2012 R2?
2
SQL Server remote connection to 2nd instance impossible
4
SQL Server Named Instance is not listening on Port 1434
3
Unable to connect to remote SQL Server instance after thorough troubleshooting
2
Dynamic Ports are being set to different ports
3
How to remotely connect SQL Server 2016. Since we have 2012 and 2016 in same server
1
How to know which instance is default in Configuration Manager if default port number is changed?
9
Configure SQL Server Analysis Services (SSAS) to run on same IP as SQL Server instance
0
Setting Up Named SQL Server Instance Network Connection