How to represent foreign key in an Extended ER Model in Chen notation?

This is a spin-off of the question at How to represent foreign key in an ER diagram? which is too vague about the needed notation.

There the idea of underlining FKs with a dotted line is stated. I also remember this from an exam. I am not sure though, it could have been a double underlining as well, this question is not determined to the dotted line. I have searched a bit, finding that a dotted line represents a weak key attribute. 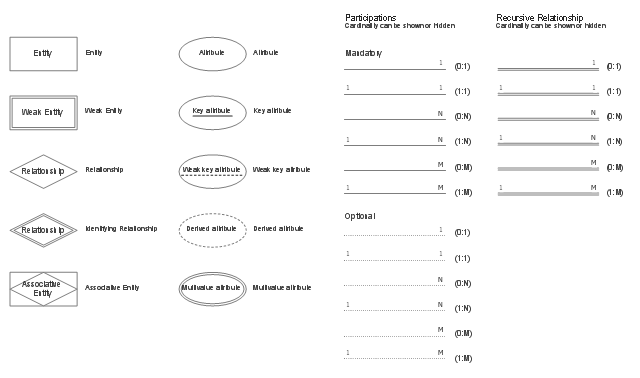 Can I use a certain format to show FKs in an EERM Extended Entity-Relationship Model in Chen notation?

I think I found the answer, it is more or less not possible and anyway not intended in an ERM. There is a small workaround left in using double underlining.

There is simply no FK to mark in an official ERM. See http://faculty.juniata.edu/rhodes/dbms/ermodel.htm:

E-R Model is not SQL-based. It's not tied to any particular logical implementation of a DBMS. It is a conceptual and semantic model, which attempts to capture meanings rather than an actual implementation.

DO NOT THINK OR START WITH TABLES--YOU WILL BE MISGUIDED ON RELATIONSHIPS AND SOME ATTRIBUTES.

Foreign key: term used in relational databases (but not in the E-R model) for an attribute that is the primary key of another table and is used to establish a relationship with that table where it appears as an attribute also.

An identifying relationship is one where the primary key is populated to the child weak entity as a primary key in that entity.

Thus, the weak key attribute is not equal to a foreign key, it is simply a primary key of another entity needed to reach an entity’s uniqueness (a weak entity is effectively the interim entity that you need to dissolve an M to N relation, using the PKs of “both sides” as attributes; this is out of my course script). Thus the dotted line is not the format for FKs.

Then, only double underlining remains as an unofficial convention which is up to now used at the university. And mind that showing the FKs is not needed anyway, a named relation implies it and should not explain it, an ERM is not about FKs; do not think in tables.

Not the answer you're looking for? Browse other questions tagged database-design foreign-key erd database-diagrams or ask your own question.

16
How to represent foreign key in an ER diagram?

0
How to represent it with UNIQUE indexes and foreign keys?
16
How to represent foreign key in an ER diagram?
4
How to model an “is a” relationship in an ERD using Crow’s foot notation?
5
How do I read ERD Notation (crow's feet) to convert to Natural Language?
7
How to model a Letter Transportation business context in a database diagram?
0
Foreign Key process
1
Do all entities in Chen notation have to be diagrammatically linked?
2
Composite key as foreign key of multiple tables
2
How to Represent Equation with Variables in Relational Database
1
Where to start learning the IDEF1X method of model notation?