Let’s say I have some entity:

...and I want to assign it some state, which has N possible values. Some of said states also come with a parameter. For example:

I original set this up as a separate table, with the states and parameters populated by the application at runtime. Then this is just simply referenced in the status table:

The problem with this is that the semantics of the states are now lost, so it’s up to the application to understand things.

As an alternative, I created an enumeration type of the states and an optional parameter key:

I haven’t written it out here, but I also put an elaborate check constraint on param to ensure it’s only non-null when the state is “quux”.

(Rather than using an enum, I could have a lookup table with the states as hard-codes records; not the parameters as they have application-specific meaning. Either way, it’s equivalent.)

Now the states are explicitly enumerated by the schema, one doesn’t have to rely on the application to define semantics. However, it’s really messy in my opinion.

Is there a more elegant way to design this?

(If it makes a difference, in terms of features, I’m using PostgreSQL.)

Define a StatusType that will migrate through to a StatusLevel and provide a mechanism for a CHECK constraint. 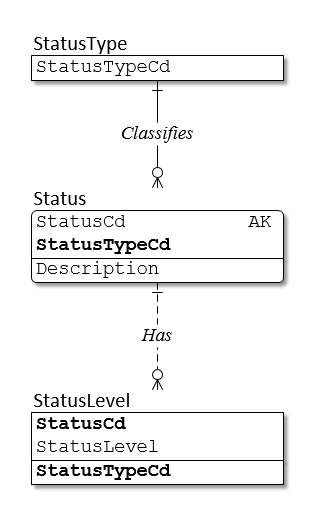 DML (I'm doing this freehand, there may be syntax errors lurking):

From there you would migrate StatusCd,Level directly to entity or to an optional attribute entity_status:

I think this is better:

i.e., The quux parameters exist in a separate table, in which a "dummy" state field exists that is forced to be quux and the tuple of the ID and state is used as a foreign key with status (i.e., so only quux status records can be added to quux_values).

Not the answer you're looking for? Browse other questions tagged postgresql database-design schema or ask your own question.