Why is my database still fragmented after I reorganized and rebuilt it, and updated the statistics in SQL Server?

I created a Maintenace Plan, first i reorganize the indexes, then rebuild, and final update the statistics every Saturday. I ran this script for verification:

But after the run, the fragmentation is still very high. Is that okay? What could be done?

Thank you for your help! :) 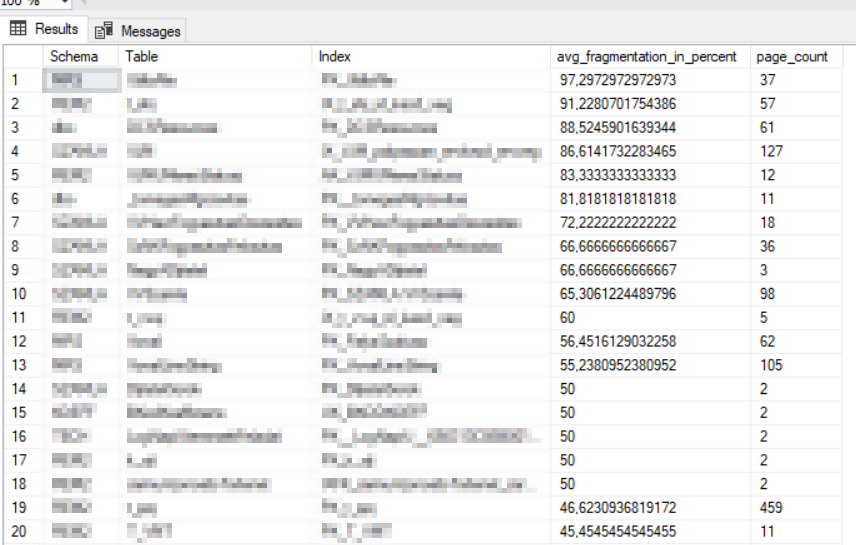 Bottom line: fragmentation is irrelevant for small indexes. Never bother about it for indexes less than some 1000 pages, or perhaps we should say 10000 nowadays. If you remember cassette tapes, we always have some noise in the background (my analogy, perhaps works better in Swedish).

Tip1: don't use single quotes for column names in SELECT list. It divert from ANSI SQL and it is "weird". :-)

Tip2: you don't have to join all those tables. Use meta-data functions instead.

Tip3: Heaps don't have fragmentation in the same way as indexes do. So either filter out the heaps or learn about forwarding pointers/forwarded records and handle them separately from your indexes. This might be useful, for instance: https://karaszi.com/rebuild-all-fragmented-heaps.

Tip4: Jumping back and forth on disk isn't as costly as it used to be. Assuming you are on faster storage than old-school spinning disks, that is. I.e., that type of fragmentation might not hurt you much. There's still the aspect of read-ahead, though. See for instance this: http://sqlblog.karaszi.com/fragmentation-the-final-installment/.

Tip5: Use something more reasonable to filter on the fragmentation level, like > 5% instead of > 0%.

Here's a query, simplified and with my recommendations above. But, again, perhaps you shouldn't worry about jumping back and forth in the first place?

But after the run, the fragmentation is still very high. Is that okay? What could be done?

The reason lies in the last column of the output you have pasted. See the column page_count. Unless you have page_count value > 2000 there is no point in rebuilding, reorganizing and updating stats of that index. This is because and I am quoting from article I wrote. The lines are basically taken from SQL Server 2000 BOL which now is not present online and is removed but still holds quite true.

Fragmentation affects disk I/O. Therefore, focus on the larger indexes because their pages are less likely to be cached by SQL Server. Use the page count reported by DBCC SHOWCONTIG to get an idea of the size of the indexes (each page is 8 KB in size). Generally, you should not be concerned with fragmentation levels of indexes with less than 1,000 pages. In the tests, indexes containing more than 10,000 pages realized performance gains, with the biggest gains on indexes with significantly more pages (greater than 50,000 pages).

Not the answer you're looking for? Browse other questions tagged sql-server performance index or ask your own question.

42
Why is my database still fragmented after I rebuilt and reindexed everything?
4
SQL Server 2008 query planner failing after index drop & recreate
8
Does Detach/Attach or Offline/Online Clear the Buffer Cache for a Particular Database?
3
SHOWPLAN does not display a warning but “Include Execution Plan” does for the same query
0
SQL Alter Index within a Script
0
Queries are performing bad after SQL Server 2008 SP4 upgrade
6
Join on NULL Key Column Optimizing as Table and Index Scans
5
SQL Server - Very high disk activity after running query?
0
Index automation job script