Materialized View: What is the Update Trigger property?

I've created a materialized view in an Oracle 18c database.

When I look at the Info tab of the materialized view in Toad, I see that there is a property called Update Trigger. 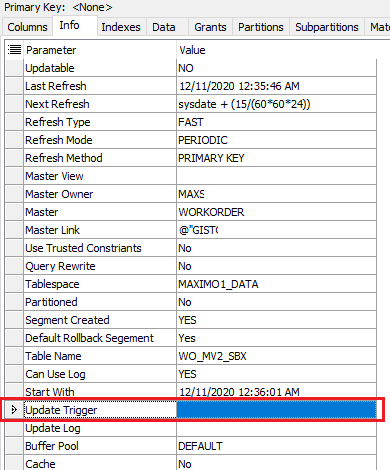 What does the Update Trigger property represent?

Those are the remains of an ancient feature called updatable snaphots that later became updatable materialized views.

Originally materialized views were called snapshots. The values for Update Trigger and Update Log come from the UPDATE_TRIG and UPDATE_LOG columns of ALL|DBA|USER_SNAPSHOTS, a view that was last documented properly in Oracle 8i: ALL_SNAPSHOTS. The 9.0 documentation of that view is actually broken.

In addition to the objects created for read-only snapshots that are described [*], when you create an updatable snapshot, two additional objects are created at the snapshot site:

Updatable materialized views were part of a feature called Advanced Replication. That is a feature that I have yet to see in a real database. About 6 years ago I found a 10.2 customer database in which someone tried to set up this feature in 2008 but failed to do it. I have never ever seen this anywhere else.

Advanced Replication became deprecated in 12.1, and desupported in 12.2.

A subsequent process then reads that log to apply the changes to the materialized view table. That application can be automatic or manual.

This: https://oracle-base.com/articles/misc/materialized-views has a nice illustration of how this works:

Not the answer you're looking for? Browse other questions tagged oracle trigger materialized-view oracle-18c or ask your own question.