Why does the SQL Server build number sequence not correlate with the release date sequence?

I'm looking at the Microsoft SQL Server 2016 Builds (see that section heading). The list of builds is given in build number order. That is, at the top of the list is the "highest" build number, and each subsequent row has lower build number than the one before.

However the release dates don't correlate with this. So here are 5 rows, for example:

If a cumulative update is supposed to contain all prior cumulative updates, then how could that last build (in the 5 above) have contained the updates from the two builds from 2019 and 2020? (Oops - only just noticed the first line is from Aug, which is after the 4th and 5th lines too!)

If I had installed the 4th and 5th builds at the time of their releases (in May 2018 then July 2018), and then that 1st build gets released in Aug 2018 - would I automatically have had those changes incorporated already? If so, what was the point of issuing an older build number?

Here is another example that just makes no sense to me. 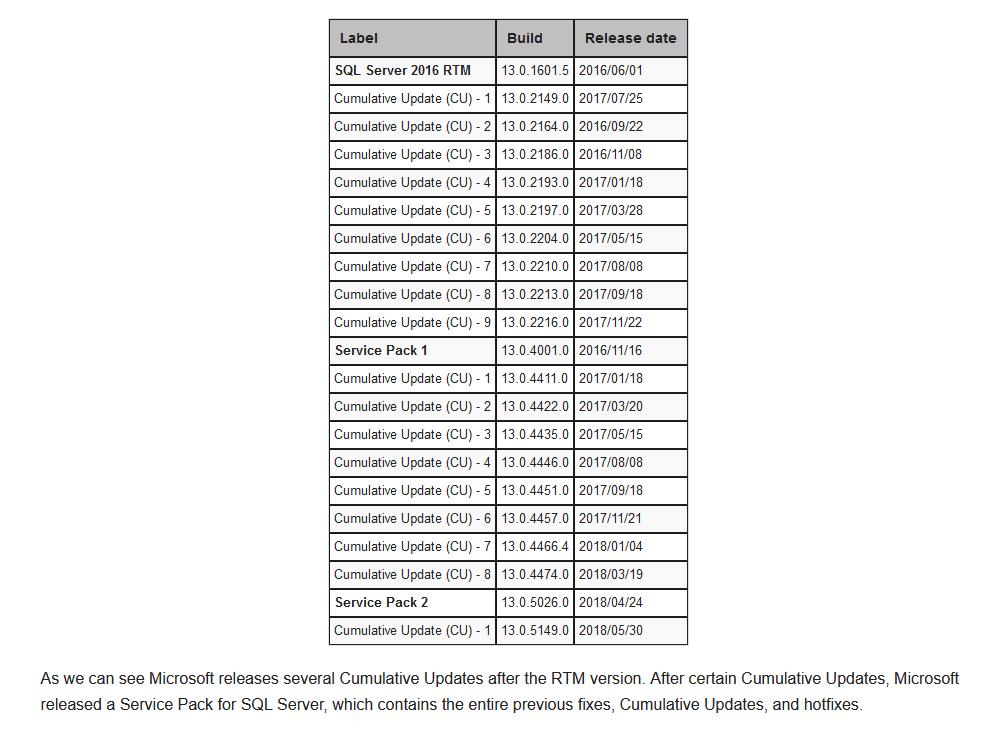 Table is from MSSQLTips.

These are General Distribution Release (GDR) builds, intended to be installed by all customers running the affected Service Pack level.

Basically, those are critical patches for SQL 2016 SP2 which don't require installing any of the Cumulative Updates.

The relevant fixes would also have been included in the next CU, and probably available as a hotfix for the current CU.

As for the build numbers, GDR is a seperate branch from CU. It's tricky to apply a single build number system to a branched codebase, but the strategy appears to be that the GDR build numbers are placed between the common root build number (SP2) and the first CU (SP2 CU1).

That's CU1, and once you are on the "CU Train" you must apply subsequent CUs to get fixes. That's why the KB's say

Prior to 2017 version of SQL Server, there was Service Packs (SP). And Microsoft released Security Updates for every SPs and RTMs.

And if we'll look upper on the patch list, we'll see the same Security Updates with the same release date for Cumulative updates also: 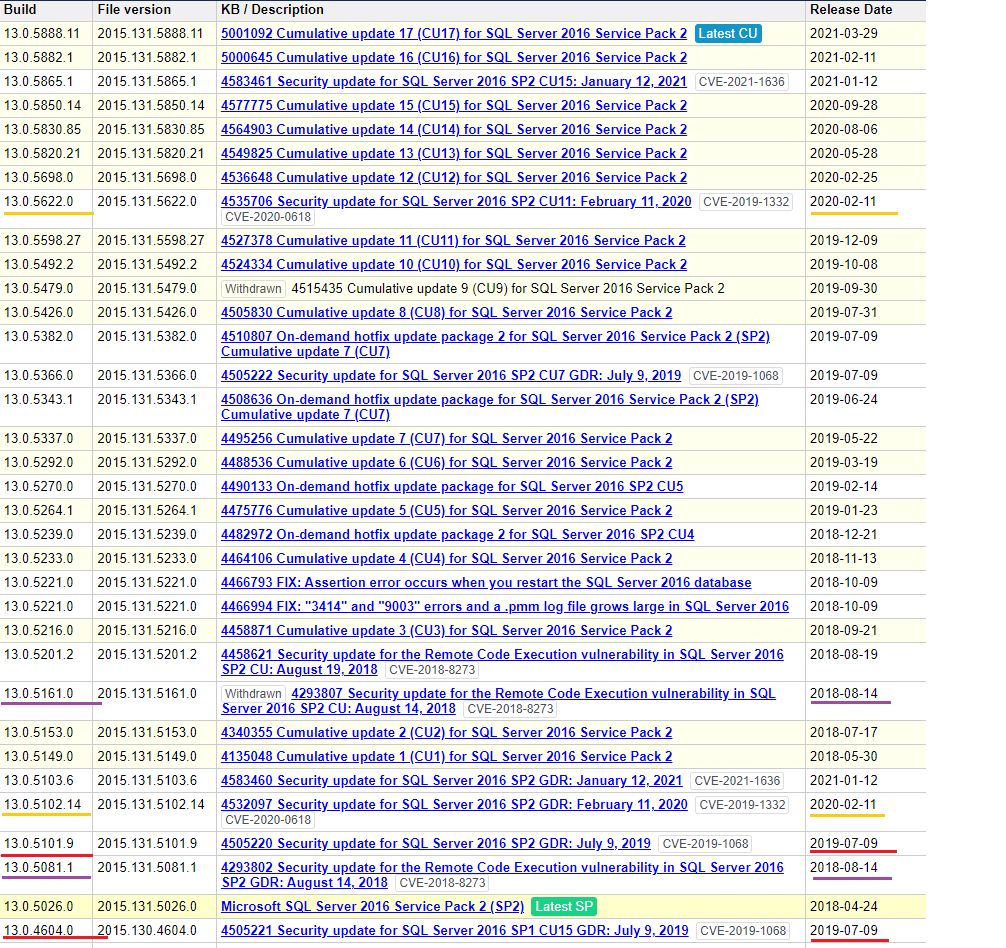 Related to your second question, dates on your list are incorrect. You can review patch list by yourself on below-mentioned URL:

5
SQL Server 2016 not using index used in 2012
0
Help needed with SQL Server query: Accessing columns not in GROUP BY clause
0
Calculate sum of N preceding values
4
Why should I apply a CU for SP2 that was released after the release of SP3?
0
alter compatibility level
4
SQL Server 2016 suddenly produces Error:402,State:1,Class:16 updating a sproc with DATETIME/DATE/TIME arithmetic, that was fine before
2
Are SQL Security Updates Cumulative? Are the vulnerabilities corrected with one Security Update also covered by the next Security Update?
5
Door Number 1, 2, or 3?...Security change, bug, or failed upgrade with an in-place upgrade from SQL Server 2016 to SQL Server 2019?